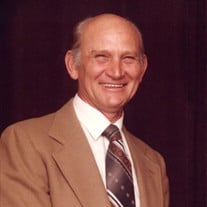 Avery A. Wiles, husband, father, brother, and friend departed this world Thursday, August 22, 2019 after a brief illness. Avery was born November 6, 1925 in Abingdon, VA and spent most of his adult life in Bristol. He proudly served his country in the U.S. Navy for 11 years both during and after World War II. After his tour of duty, he returned to Bristol, started a family and worked hard to provide for both immediate and extended family. Avery become well known as the owner of Wiles Construction Company in Bristol where he developed land and built both residential and commercial structures. He gave selflessly to his family and friends and will be so greatly missed by those who knew and loved him. He is preceded in death by his mother, Effie Wiles Hamby; father, Jake Wiles; brothers, Robert and John Wiles; sister, Jo Ann Volz and his beloved son, Avery A. “Buddy” Wiles. Survivors include his devoted wife of 51 years, Lynda Wiles; daughters, Debbie Hannon and Shelia Wilson and husband Clyde; eight grandchildren, Scott, Todd and Travis Hannon, David and Ray Wilson, Beth Hutton, Dion and Matthew Wiles. He also leaves behind 15 great-grandchildren; sister, Frances Batitsas and numerous nieces and nephews and one very special nephew, David Wiles. The funeral service will be conducted at 12, Noon, Monday, August 26, 2019 in Akard Funeral Home Chapel with Rev. Sam Haynes officiating. Burial will follow in Shelby Hills Cemetery with Rev. David Wilson officiating. Pallbearers will be Jim Smith, Dion Wiles, Matthew Wiles, Scott Hannon, Todd Hannon and Grayson Wiles. Honorary pallbearers will be Jim McDevitt, Clyde Wilson, David Wilson, Ray Wilson and Travis Hannon. The family will receive friends from 11:00 – 12, Noon, Monday prior to the service. Condolences and memories may be left for the family at akardfuneralhome.com Akard Funeral Home, (423) 989-4800 is serving the Wiles family.

Avery A. Wiles, husband, father, brother, and friend departed this world Thursday, August 22, 2019 after a brief illness. Avery was born November 6, 1925 in Abingdon, VA and spent most of his adult life in Bristol. He proudly served his... View Obituary & Service Information

The family of Avery A. Wiles created this Life Tributes page to make it easy to share your memories.

Send flowers to the Wiles family.