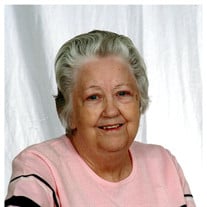 Betty Kennedy Sproles received her freedom from life’s trials, troubles, and tribulations on October 19, 2019 and entered into Heaven to be with her heavenly father. She was born in Mendota, VA on September 27, 1928, the fourth daughter of the late John D. and Rebecca S. Kennedy. In addition to her parents, she was preceded in death b her husband, Fleet W. Sproles; infant daughter, Brenda Lee Sproles; brother, Bert Kennedy; sisters, Maxie Keesee, Geneva Lewis, Macy Sage, Ruth Mays and Rosalind Elliott. Betty was a devoted wife, mother, grandmother and great-grandmother as well a neighborhood babysitter as long as her health permitted. She was a member of the Church of Jesus Christ in Mendota and was a member of Belle Walsh #65 Order of the Eastern Star. She was active in the Mendota community and Senior Citizens for many years. She also volunteered for Mendota Head Start. Betty is survived by her daughter, Linda Sproles; son, Michael Sproles and wife Terrill; granddaughter, Jamie Brooks and husband, Matthew; grandson, Cody Browning and the light of her eyes, great-grandson, Clayton Brooks; brother, Robert Kennedy all of Mendota; sister, Ann Rutledge of Walkertown, NC.; several nieces and nephews and extended family and friends. The funeral service will be conduced at 8:00 P.M., Monday, October 21, 2019 in Akard Funeral Home Chapel with Minister David Wilson officiating. The committal and interment will be at 11:00 A.M., Tuesday, October 22, 2019 in Hendricks Cemetery with Minister Ray Davis officiating. Pallbearers will be Cody Browning, Matthew Brooks, Gordon Barker, Jr., Gary Hobbs, Craig Kennedy, Jeff Kennedy. Honorary Pallbearers will be Tommy Sproles and Scotty Sproles. The family will receive friends 6:00 – 8:00 P.M. prior to the service. In lieu of flowers the family is requesting that memorials be made to Hendricks Cemetery in care of Linda Sproles, 6204 Appaloosa Road, Mendota, VA 24270 Condolences may be sent to the family at akardfuneralhome.com Akard Funeral Home, 1912 West State St., Bristol, TN (423) 989-4800 is serving the family of Mrs. Sproles.

Betty Kennedy Sproles received her freedom from life&#8217;s trials, troubles, and tribulations on October 19, 2019 and entered into Heaven to be with her heavenly father. She was born in Mendota, VA on September 27, 1928, the fourth daughter... View Obituary & Service Information

The family of Betty Kennedy Sproles created this Life Tributes page to make it easy to share your memories.

Send flowers to the Sproles family.