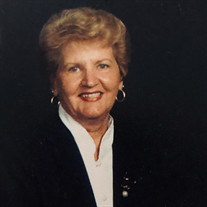 Bonnie Yvonne Honaker Haskins, age 80 of Tampa, Florida, formerly of Bristol, Tennessee, passed away on Wednesday, May 12, 2021 following a prolonged battle with brain cancer. She died peacefully while surrounded by family. Bonnie was born in Matoaka, West Virginia on May 20, 1940, the only child of the late Grace Short Shuck and Giles Shuck. She graduated from Matoaka High School in 1957 and entered Concord College in Athens, West Virginia, where she received a Bachelor of Science in Music Education in 1961. From there, she continued her education at the College of Graduate Studies of West Virginia University. A music teacher with over 40 years of service, Bonnie began her teaching career in 1961 in Mercer County, West Virginia. She married Jack W. Honaker in 1963, and, in 1978, they and their son Greg moved to Bristol for Jack’s work. Bonnie continued her teaching career after the move, working in the Sullivan County School System for 22 years before joining Sullins Academy from 2002 until her retirement. Bonnie and Jack, who remained in the Tri-Cities area, were married 39 years at the time of his death in 2002. After Jack’s passing, Bonnie married Eugene (Gene) H. Haskins. The two had attended grievance counseling with their pastor as Gene had lost his wife Mary Lou in the same timeframe. What began as two friends grieving together developed into romance, and they married later that year. They were close friends and part of a social group called the "Depression Club," four couples from First Presbyterian Church who enjoyed vacations, game nights, and dinners together over many years. Bonnie enjoyed a happy, fulfilling marriage of almost 18 years with Gene until his death earlier this year. Their marriage provided Bonnie, an only child and mother of an only child, with a large and lively immediate family. She cherished the opportunity to be a mother, grandmother, and friend to Gene and Mary Lou’s family. Bonnie was an accomplished pianist and loved to share the gift of music with those around her. She served as Choir Director of Melrose Presbyterian Church in Athens, West Virginia from 1967 to 1977. In 1980, she organized and directed the Children’s Choir at First Presbyterian Church in Bristol, Tennessee. In 1986, she became a charter member of the East Tennessee Children’s Choir in Johnson City, Tennessee. Her contributions to music appreciation and education in the Tri-Cities as well as the greater state of Tennessee are too numerous to list in their entirety, but her many notable endeavors include participating in the Bristol Concert Choir and the First Presbyterian Sanctuary Choir and performing as part of an ensemble at Carnegie Hall in New York City in 2001. Bonnie also served on the Board of Deacons at First Presbyterian Church of Bristol and was an active member in St. Andrew Presbyterian Church of Tampa at the time of her death. Bonnie is preceded in death by her parents, Giles and Grace Shuck, her first husband, Jack Honaker, and her second husband, Gene Haskins. She is survived by her son Greg Honaker and wife Kim of Murfreesboro, Tennessee and five stepchildren – Gary Haskins and wife Terri of Tucson, Arizona; Kerry Haskins and wife Lisa of Tampa, Florida; Jeff Haskins and wife Melissa of Cullman, Alabama; Amy Johnson of Cullman, Alabama; Chris Haskins of Jonesboro, Tennessee; 12 grandchildren and two great grandchildren, with one on the way (all through her marriage to Gene); several cousins; and a beloved pup Misha. The family wishes to thank Discovery Villages at Tampa Palms, Visiting Angels of Tampa, Florida and St. Andrew Presbyterian Church for their loving care of Bonnie during this difficult time, with special thanks to Martha Ann Hughes of Visiting Angels for her compassionate and unwavering support during the final stages of Bonnie’s disease. The funeral service will be conducted at 2:00 P.M., Saturday, May 22, 2021 at First Presbyterian Church in Bristol, Tennessee with Rev. Sam Weddington officiating. The family will serve as pallbearers. Burial at Glenwood Cemetery will immediately follow the funeral service. Gene Haskins’ ashes will also be interred at this time, with military honors conducted by Shaw Air Force Base Honor Guard. The family will receive friends from 1:00 - 2:00 P.M., Saturday, prior to the service at the church. Flowers may be sent to First Presbyterian Church of Bristol, Tennessee or, alternatively, donations made in Bonnie’s memory to the Mountain Empire Children’s Choral Academy, First Presbyterian Sanctuary Choir (Bristol), or the American Cancer Society. Condolences and memories may be left for the family at akardfuneralhome.com Akard Funeral Home, 1912 West State St., Bristol, Tennessee (423) 989-4800, is serving the family of Mrs. Haskins.

The family of Bonnie Yvonne Honaker Haskins created this Life Tributes page to make it easy to share your memories.

Send flowers to the Haskins family.