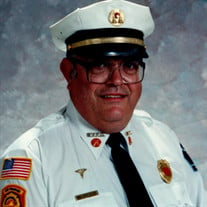 “Greater love hath no man than this that he would give his life for his friends.” John 15:13 Buddy Joe (Bulldog) Eller, age 83 died, March 17, 2020. Buddy was born in Glade Spring Virginia on October 13, 1936 to the late Howard William (Pete) Eller and Evelyn Roberts Eller. Buddy spent most of his life in Bristol graduating from Virginia High School. He then joined the Marine Corps and served in Okinawa. Upon returning to the states, he worked at Monroe Calculating Co. until he was hired for a job he loved at the Bristol Virginia Fire Department. As a firefighter, he became a state fire instructor and trained many volunteer firemen in Southwest Virginia. He retired as Assistant Fire Chief in 1993. Buddy was also a Life Member of Bristol Life Saving Crew answering many calls for help from Bristol area residents for over thirty years. He served as a volunteer trainer for the Virginia High School sports program for over twenty years and also for the Marion Hurricane Football team for several years. As a volunteer for the American Red Cross, Buddy was Disaster Coordinator for Southwest Virginia for five years and a member of the National Red Cross Disaster Team working disasters in states all across the United States. An avid Civil War Re-enactor, Buddy portrayed a Confederate Surgeon and gathered antique medical instruments and built furniture to reproduce a Civil War Era Field Hospital which he took to many states for Show & Tell for over thirty years. In 1998 Buddy received the Bristol Chamber of Commerce Volunteer of the Year; 1999 the American Red Cross Clara Barton Volunteer Award for Meritorious Volunteer Leadership; 2005 the Virginia High School League Award of Merit for Region IV and 2011 the Bristol Mayors’ Award of Distinction. He was a member of First Presbyterian Church and attended Celebration Church. In addition to his parents, he was preceded in death by his wife of 58 years, Jean Harrison Eller, two sisters, Ann Cadle and Mary Virginia Brooks and brother, William Eller. He is survived by two daughters, Kathy Humphrey and Tammy Wright and husband Steve; two grand-daughters, Christine McKenzie and Laura Jones and husband, Seth; four great-grandchildren, Moira McKenzie, Ian McKenzie, Zoe Jones, and Nora Jones; many nephews and nieces, fellow re-enactor and cousin, Jim Eller, special friends, Randy Haga, Frank Krantz and Don Findley and his “therapy” friends at Town & Country Auto Parts. A graveside service will be conducted at 3:30 P.M., Thursday, March 19, 2020 at Mountain View Cemetery with Pastor Steve Wright officiating. A memorial service will be held at a later date. Friends and family may stop by the house at any time. In lieu of flowers, contributions may be made to Fellowship of Christian Athletics, P.O. Box 16757, Bristol VA 24209. Condolences and memories may be left for the family at akardfuneralhome.com Akard Funeral Home, (423) 989-4800 is serving the Eller family.

The family of Buddy Joe (Bulldog) Eller created this Life Tributes page to make it easy to share your memories.

“Greater love hath no man than this that he would give his life...

Send flowers to the Eller family.