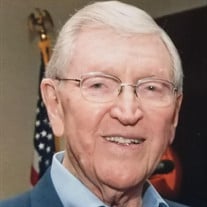 The Honorable Carl R. Moore, Bristol, TN, left this life with the same grace and dignity that he carried throughout his time on earth. He was recognized by all as a True Gentleman. Carl was born on February 26, 1930, and died peacefully at home surrounded by love on September 30, 2021. He was married to the love of his life, Elliott G Moore. The father of 4 children, he was preceded in death by his oldest daughter, Janet Lynn. He is survived by daughter Cynthia Moore Lotz (Fort Lauderdale) and her son Tyler; daughter Dana Moore and her husband Jack Isenhour (Nashville); and son Randy Moore, (Piney Flats.) and his children Keaton and Adair. He leaves many friends, considered his “chosen family”, and his dog family, Poppy and Billy. As both an elected official and a proud community member, he played a key role in the success of Bristol, and Tennessee, by balancing the preservation of the past with an eye on the future. While he is known mostly for the development of the Bristol International Speedway and Dragway, as well as various hotel and apartment ventures, he took great pride in the restoration of the Paramount Theatre for the Arts, and the landmark Bristol Train Station Depot. He and his daughter Dana were instrumental in passage of federal and state legislation designating Bristol as "The Birthplace of Country Music." While serving in both the Tennessee House of Representatives and as Majority Leader of the Tennessee State Senate, he focused on bringing jobs and roads to Northeast Tn, and making sure Nashville knew “the State does not end in Knoxville.” Although he was a proud Democrat, he worked across the aisle all his life to get things done, developing many of his strongest bonds in politics with his Republican friends. During his decades of service, he championed public education through legislation and his service on the TN Board of Regents. He fought for mental health resources for all, and recognized the Arts and Tourism as not only adding quality to life, but as economic development tools for communities. He was instrumental in the creation of the Tennessee Performing Arts Center in Nashville, and was honored to serve on its inaugural board. As a member of ROTC and the US Army, he took great pride in his most recent service as a member of the Tennessee Veteran’s Home Board. His slogan for his 1976 Senate campaign was “Bring Back Common Sense Government,” and he often said we need more of that today. Every candidate for statewide office knew their campaign was not complete without a stop at the Moore family lake house on Boone Lake for a Meet-and-Greet or a fundraiser. Despite his tireless dedication to the community, he was never happier than when he was with Elliott. Powerhouses individually, they because an unstoppable force for good during their 35-year marriage. He loved his family, his farm and his animals, being on or near any body of water. He was a dedicated Lion’s Club member for more than 6 decades, loved his Alabama football, the Lunch Bunch, The Has Beens, Pal’s milkshakes, and a cold beer. He greatly enjoyed his many friendships, especially with Father Joe Dunagan. There will be a private church service at Emmanuel Episcopal Church. Once the pandemic is over, there will be Celebrations of Life he so richly deserves, in both Bristol and Nashville. If you would like to honor his memory, the family requests donations to Emmanuel Episcopal Church, 760 Cumberland Street, Bristol, VA, 24201, or Bristol Speedway Children’s Charities, 151 Speedway Drive, Bristol TN 37620 Condolences and memories may be left for the family at akardfuneralhome.com Akard Funeral Home, (423) 989-4800 is serving the Moore family.

The Honorable Carl R. Moore, Bristol, TN, left this life with the same grace and dignity that he carried throughout his time on earth. He was recognized by all as a True Gentleman. Carl was born on February 26, 1930, and died peacefully at home... View Obituary & Service Information

The family of Carl R. Moore created this Life Tributes page to make it easy to share your memories.

Send flowers to the Moore family.