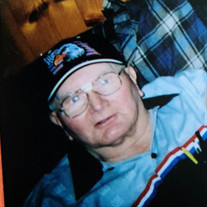 Charles F. Burnett, known to many as “Corky”, departed this word on June 12, 2021 after living to the age of 91 following a battle with dementia. His final days were made easier by the compassion shown by the care of the nursing staff from Avalon Hospice. In his last months of life Charles was a resident of Dominion Senior Living of Bristol and Viviant Healthcare of Bristol where his kind nature, sense of humor, and vivid imagination won over the hearts of all who met him. Charles celebrated his 91st birthday on April 2nd with carrot cake and balloons and many smiles. On his final day on this earth the staff of his nursing facility held a special graduation ceremony for “grandson” Chandler Kreeger (Virginia High Class of 2022) so that Charles could fulfill his desire to see him graduate. This ceremony was covered in the local media and picked up for national syndication. Prior to retiring in 2007, Charles worked many jobs throughout the Tri-Cities area, most recently as the head custodian at Bill Gatton Chevrolet. He loved the Lord, regularly read his King James bible, and in healthier times could be found on the front porch swing watching the world go by. He enjoyed tending to his roses and driving around “watching television” with occasional stops to pick up items at yard sales. Not a man that spoke much, when he did it was with a purpose and those around him listened. Charles married Bonnie Sue Ballou in 1977 gaining two sons whom he raised as his own. His sons and his grandchildren were his pride and joy. Charles was preceded in death by his parents, Clyde Robert and Mary California Burnett, several siblings, his greatly missed son Jarvis Preston Offield and his beloved dogs, Daisy and Rosebud. He is survived by his wife of 44 years, Bonnie Sue, a resident of Bristol, VA; one son, Tony (and wife Katherine) Offield of Las Vegas, NV; and grandchildren Rebecca, Daniel, and Bethany Offield, and adopted “grandson” Chandler Kreeger. The funeral service will be conducted at 7:00 P.M., Monday, June 21, 2021, at Akard Funeral Home with Rev. Mark Morgan officiating. The family will receive friends from 6:00 – 7:00 P.M., Monday prior to the service. A private family burial will be in Mountain View Cemetery. In lieu of flowers, donations in honor of Charles Burnett’s memory are requested to allow his family to support the residents and good works of Viviant Healthcare of Bristol. Donations can be made by deposit at any TruPoint Bank branch to Account Number 10515887 (Bonnie Sue Burnett Viviant Resident Account), by sending a check payable to Bonnie Sue Burnett with the notation Viviant Resident Account or mailed to Mrs. Burnett c/o Akard Funeral Home – 1912 West State Street, Bristol, TN 37620. Condolences and memories may be left for the family at akardfuneralhome.com Akard Funeral Home, (423) 989-4800 is serving the Burnett family.

Charles F. Burnett, known to many as &#8220;Corky&#8221;, departed this word on June 12, 2021 after living to the age of 91 following a battle with dementia. His final days were made easier by the compassion shown by the care of the nursing... View Obituary & Service Information

The family of Charles F. Burnette created this Life Tributes page to make it easy to share your memories.

Charles F. Burnett, known to many as “Corky”, departed this word...

Send flowers to the Burnette family.