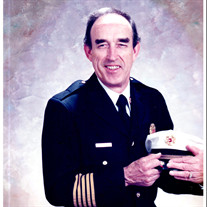 Charles William Denton, 84, passed away on September 9, 2019, at the University of Virginia Medical Center. Always concerned with physical fitness, he was an avid walker and was often seen as he made his rounds near Virginia High School. Now, he can walk the streets of gold. A beloved husband, father, grandfather, and great-grandfather and a man of tremendous character and humility, he is survived by his wife Carolyn; his daughter Deborah Boggs; his grandson William Daugherty, who was especially bonded to his grandfather; his grandson Jon Rogers, granddaughter-in-law Nicole, and great-granddaughter Cady; his sister Judy Hilt; his sister-in-law Evelyn Baker and her husband Ronald; his brother-in-law D.C. Combs; as well as several nieces and nephews. He was preceded in death by sister Kathleen Combs. Born October 26, 1934, to Walter D. and Jennie (Cox) Denton, Charles was raised in Denton Valley and remained a life-long resident of Bristol. He married his best friend Carolyn (Morgan) on July 2, 1954, and they celebrated their sixty-fifth wedding anniversary this summer. On July 1, 1958, he began a career in public service with the Bristol, Virginia, Fire Department that spanned four decades, including over fifteen years as the city’s Fire Chief. He considered it an honor and a privilege to serve the citizens of Bristol, and Chief Denton was instrumental in upgrading the department’s equipment, technology, training, and hazardous materials capabilities. He retired with honors in 1998, and he was the last surviving member of the brigade which served the department in 1961. Charles and Carolyn have remained fixtures of the Trinity United Methodist Church community for over fifty years, and his family and friends will gather to celebrate his life there on Saturday, September 14, at 11:00 a.m. The service will be officiated by the Reverend Rosa Slavik and the Reverend Jim Pollack. In lieu of flowers, the family has asked that those wishing to make contributions donate instead to the Children’s Backpack Program sponsored by Trinity United Methodist Church, 320 Carter Street, Bristol, Virginia 24201. Serving area children in need, this program was especially important to Charles before his passing. Condolences and memories may be left for the family at akardfuneralhome.com Akard Funeral Home, (423) 989-4800 is serving the Denton family.

Charles William Denton, 84, passed away on September 9, 2019, at the University of Virginia Medical Center. Always concerned with physical fitness, he was an avid walker and was often seen as he made his rounds near Virginia High School. Now,... View Obituary & Service Information

The family of Charles William Denton created this Life Tributes page to make it easy to share your memories.

Send flowers to the Denton family.