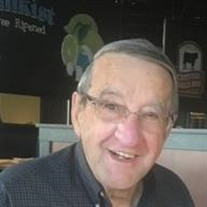 Chares E. Kilby, 86, died peacefully at home on Saturday, September 21, 2019. He was born on October 22, 1932 in Bristol, VA to the late Clarence W. Kilby and Ella Mae Canter Kilby. He graduated from Valley Institute High School and served in the United States Marine Corp during the Korean War. He was employed by Dairymen Inc. for 30 years as technician and service manager. After his retirement from Dairymen he established, owned and operated Kilby Heating and Cooling for 28 years before retiring at age 85. He thoroughly enjoyed his work and his clients, always looking forward to the next days’ work. He was a member of State Street United Methodist Church and has attended Fellowship Chapel for many years. In addition to his parents he was preceded in death by his beloved siblings Peggy Colleen Anderson and Jack Wilmer Kilby, who passed on September 19, 2019. He is survived by his wife of 67 years, Violet Kilby; daughters, Debra Kilby of Berlin, Germany and Teresa Cloyd and her husband Rob Simis of Bristol, VA.; grandsons, Brad Cloyd of Bristol, TN, Ryan Cloyd and wife Kelly of Greenville, S.C.; great-granddaughters, Ella Brooks Cloyd, Hannah Elizabeth Cloyd; brother, Harry Kilby and wife, Lynda of Bristol, VA; sister-in-law, Carolyn Ball Kilby of Randleman, N.C. and several nieces and nephews. The family would like to extend thanks to Caris Hospice, Respite RX and to the friends, family and caregivers who offered support during Charles’s final weeks. The graveside funeral service will be at 11:A.M., Tuesday, September 24, 2019 in Mountain View Cemetery with Rev. Scott Price officiating. Interment will follow in Mountain View Cemetery. Military Honors will be conducted by the Bristol VFW Honor Guard. In lieu of flowers memorials may be made to Fellowship Chapel, 201 Crockett St., Bristol, VA 24201 or to For Pete’s Sake Animal Rescue, P.O. Box 1982, Bristol, TN 37621 – 1982. Condolences may be sent to the family at akardfuneralhome.com Akard Funeral Home, 1912 West State St., Bristol, TN (423) 989-4800 is serving the family of Mr. Kilby

The family of Charles E. Kilby created this Life Tributes page to make it easy to share your memories.

Send flowers to the Kilby family.