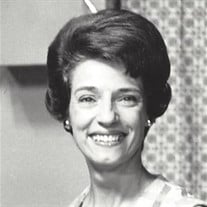 Coleen Harris, 92, was called home to God on February 4, 2019. She was born on November 17, 1926 in Walhalla, SC. Coleen married Jack R. Harris on August 1, 1951. For 7 years during the 1970's Coleen hosted a program on WCYB TV called "Open House with Coleen Harris." This show featured cooking, crafts, and interviews with local, regional and national celebrities. She was preceded in death by a son, Scott Harris in 2016. Survivors include son, Tom Harris of Elbert, CO; two brothers, John Thomas and wife, Sue of Sapphire, NC and Charles Thomas of FL; two grandchildren, Bill Harris of Gainesville, FL and Heather Thornton of Atlanta, GA; and one great-grandchild, Alexander Thornton. A memorial service and inurnment will be conducted at 11:00 A.M., Saturday, February 23, 2019 in Glenwood Cemetery Mausoleum. In lieu of flowers, memorials may be sent to Grant Widner Group Home, 4121 Old Jonesboro Rd., Bristol, TN 37620. Condolences and memories may be left for the family at akardfuneralhome.com Akard Funeral Home, (423) 989-4800 is serving the Harris family.

The family of Coleen Harris created this Life Tributes page to make it easy to share your memories.

Send flowers to the Harris family.