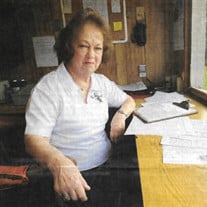 Dorothy Elaine Taylor Cox, 94, transitioned peacefully to a higher plane, July 30, 2021 at her home in Bristol, Virginia. She was born in Bluefield, Virginia, daughter of Carl and Naomi Belle French Taylor. She was preceded in death by her husband, Boyce E. Cox, her sister, Margie Cozzolino, and her brother, Carl Taylor, Jr. She is survived by her two daughters, Sherre Adele Cox Sullivan and Jan Denise Cox Ramey. She was first and foremost, a wonderful Mother, and as her name means, she was “a gift of God”. Dorothy served as Director of Finance with the Bristol Virginia School System for 23 years and, as a member of the Bristol Baseball Board of Directors, was their acting Treasurer for over 40 years. She oversaw the operation of what became “The Dotty Cox Souvenir Stand”, at Boyce Cox Field, in honor of her significant contributions to Bristol Baseball. In 1999 she was awarded Appalachian League Woman of the Year and this year was the first woman to be inducted into the Appalachian League Hall of Fame. A deeply heartfelt “thank you” to Caris Healthcare, Lorraine Ison, Lenette Leonard, Melissa Conklin, Shanna Cox, Dr. James Schrenker, and Rebecca Flora-Waterman, FNP-C for the care and kindness they gave our Mother. A private graveside service will be conducted by Chaplin Cass Farrior. Those attending will wear masks and socially distance. In lieu of flowers send donations to Anderson Street United Methodist Church, 954 Anderson Street, Bristol, Tn. 37620 Condolences may be sent to the family at akardfuneralhome.com Akard Funeral Home, 1912 West State St., Bristol, TN (423) 989-4800 is serving the family of Mrs. Cox

Dorothy Elaine Taylor Cox, 94, transitioned peacefully to a higher plane, July 30, 2021 at her home in Bristol, Virginia. She was born in Bluefield, Virginia, daughter of Carl and Naomi Belle French Taylor. She was preceded in death by... View Obituary & Service Information

The family of Dorothy Elaine Taylor Cox created this Life Tributes page to make it easy to share your memories.

Send flowers to the Cox family.