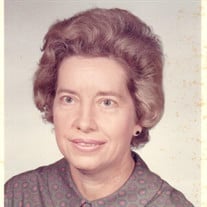 Frances Ethel Allen, age 97, of Bristol, TN entered into eternal rest on Tuesday, October 24, 2017 at Brookdale Senior Living –Kingsport. She was a member of Weaver’s Church, and a graduate of Bluff City High School and East TN State University. She taught at several elementary schools in Sullivan County and Bristol, TN and retired from Rosemont Elementary School in Bristol, TN after 40 years. She was born October 31, 1912 to the late Frank H. and Ethel Ellis Allen. In addition to her parents, she was preceded in death by her sisters, Mary Rotenberry, Nancy Woodward, Jane Reid and her brothers-in-law, Ralph Rotenberry, Jack Woodward and Walter Reid. Survivors include her brother, Ben E. Allen and wife, Dorothy and several nieces and nephews. The family would like to give a special thank you to her caregiver, Doris Lawson and Amedisys Hospice of Kingsport. The family will receive friends at 12:30 P.M., Thursday, October 26, 2017 at Akard Funeral Home with a graveside service to follow in Weaver’s Cemetery with Rev. Terry Goodman officiating. Pallbearers will be Andy Allen, Mike Allen, Charlie Allen, John Allen, David Rotenberry, Mark Blanken and Kurt Blanken. Honorary pallbearer will be Ben Allen. In lieu of flowers, donations may be made to East TN State University, College of Education, University Advancement, P.O. Box 70267, Johnson City, TN 37614-9907 Condolence and memories may be left for the family at akardfuneralhome.com Akard Funeral Home, (423) 989-4800 is serving the Allen family.

The family of Frances Ethel Allen created this Life Tributes page to make it easy to share your memories.

Send flowers to the Allen family.