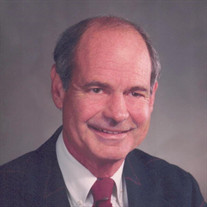 Frank Henebry Molteni passed away on Sunday, April 11, 2021 at the age of 80. Frank or Papa as the grandchildren called him was born in Lynchburg, Virginia to the late Frank F. and Margaret Henebry Molteni. Frank was a graduate of St. Anne Catholic School, Virginia High School and Belmont Abbey College in Belmont, North Carolina. After serving in the United States Army, Frank eventually returned to Bristol where he became the President and sole owner of the family run jewelry store, DB Ryland and Company, one of the regions oldest family-owned businesses. As a certified gemologist and a member of the American Gem Society, Frank was passionate about the business for 44 years until the store closed in 2013. In retirement, he often said that he didn’t miss the hustle and bustle of running the store, but he greatly missed the interactions with all his clients and especially helping them pick out the perfect piece of jewelry. Frank also served as past president of the Bristol Host Lions Club; vice-president of the Bristol Chamber of Commerce, a supporter of the DECA Clubs of Virginia High School and was an Eagle Scout. As a member of Saint Anne Catholic Church, Frank served on the Pastoral Council and the Knights of Columbus. When Frank was not busy working at the “store”, he loved spending time boating on South Holston Lake, playing poker, vacationing with his children and grandchildren in Hilton Head, South Carolina and also getting out of town for the occasional guys tennis trip to Hilton Head where he was able to unleash his wonderful dry sense of humor that his family will greatly miss. Survivors include his wife of 55 years, Mary Finnegan Molteni; his son, Jay Molteni and his wife Sandy of Charlotte, North Carolina; daughter, Meredith Molteni Luck and her husband Marshall of Richmond, Virginia; grandchildren Frank Garrett Molteni, Maggie Ryland Molteni, Frederick Marshall Luck, III and Mary Ryland Luck and several Nieces. A Funeral Mass will be conducted at 11:00 A.M., Friday, April 16, 2021 at St. Anne Catholic Church with Father Tom Ianucci and Father Chris Hess concelebrating. (Face coverings are required at the Mass). The funeral will also be livestreamed at www.stannes-bristol.org. Entombment will follow in St. Anne Catholic Church Cemetery. In lieu of flowers, memorials may be sent to St. Anne Catholic School, 300 Euclid Ave., Bristol, VA 24201 or St. Jude Children’s Research Hospital, 501 St. Jude Place, Memphis, TN 38105. Condolences and memories may be left for the family at akardfuneralhome.com Akard Funeral Home, (423) 989-4800 is serving the Molteni family.

Frank Henebry Molteni passed away on Sunday, April 11, 2021 at the age of 80. Frank or Papa as the grandchildren called him was born in Lynchburg, Virginia to the late Frank F. and Margaret Henebry Molteni. Frank was a graduate of St. Anne... View Obituary & Service Information

The family of Frank Henebry Molteni created this Life Tributes page to make it easy to share your memories.

Send flowers to the Molteni family.