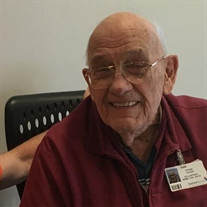 Frank Tilden, age 92, of Bristol, TN, passed away peacefully on August 15, 2019. Born on February 1, 1927 in Brooklyn, NY, he grew up on the tip of Long Island in Montauk Point. He earned the Eagle Scout award in 1945, and graduated from Columbia University in the city of New York in 1949. He then worked two years in Military Intelligence in Frankfort, Germany. He married Peggy O’Hara in 1954 and relocated to several Virginia cities before making Bristol his permanent home in 1960. He worked in the insurance business for almost forty years, first with Robert C. Boswell and then he co-founded his own company, Associated Insurance Services and worked there until his retirement in 1997. Frank felt that if he was not able to help others then he did not have a purpose on this earth. He was a selfless, giving person, sharing his talents and love with the Bristol community. In the 1960’s and 1970’s, he was a coach for Avoca Little League baseball and a Boy Scout leader for several years. He was a member of Kiwanis Club for 46 years, including one year as President. Frank served on the Bristol School Board for 6 years and he also served on three committees for the City Council. Since 1960, he was a member of Central Presbyterian Church. He donated blood for 20 years certifying him as a lifetime member of the Bristol Memorial Hospital blood bank. Inspired by the care of hospice during his wife’s bout with cancer, he spent 20 years volunteering for Wellmont Hospice not only caring for the patient but also for their loved ones long after the patients’ death. He spent 8 years as a hotline volunteer with Bristol Crisis Center and several years tutoring elementary school students at Avoca Elementary School. Frank spent over 9300 hours as a Bristol Memorial Regional Medical Center volunteer which included driving the golf cart to assist people to their cars and working at the west wing information desk. As a volunteer, he always asked for your name and if he didn’t know it when you came in, he knew it when you left! His passions besides his volunteer work and family included bowling and golf, Bejeweled, Sudoku, crosswords, hearts, and the Atlanta Braves. He is preceded in death by his wife, Peggy Tilden, twin sister, Pat Casement, and sister, Gloria Geiger. He is survived by his three sons, Mark and wife Emily (Atlanta, GA), Barry and wife Cindy (Richland, WA), and Tommy and wife Jill (Carrollton, TX). Six grandchildren, Amy, Matt (wife Jessica), Anthony (wife Heather), Andrew (fiancée Lauren), Stephanie and Benjamin Tilden and one great-grandson, Simon Tilden, and another great-grandson on the way. A memorial service will be held at 2:00 pm, Monday, August 19, 2019 at Central Presbyterian Church. Service. The family will receive friends until 4:00 pm after the service in the Fellowship Hall. In lieu of flowers, memorials may be made to Central Presbyterian Church, 301 Euclid Avenue, Bristol, VA, 24201 or Ballad Hospice House, 1 Medical Park Blvd., Bristol, TN 37620. Condolences may be sent to the family at akardfuneralhome.com. Condolences may be sent to the family at akardfuneralhome.com Akard Funeral Home, 1912 West State St., Bristol, TN (423) 989-4800 is serving the family of Mr. Tilden

Frank Tilden, age 92, of Bristol, TN, passed away peacefully on August 15, 2019. Born on February 1, 1927 in Brooklyn, NY, he grew up on the tip of Long Island in Montauk Point. He earned the Eagle Scout award in 1945, and graduated from... View Obituary & Service Information

The family of Frank W. Tilden created this Life Tributes page to make it easy to share your memories.

Send flowers to the Tilden family.