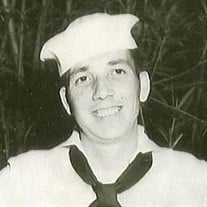 George. E. (Joe) Ferguson, age 94, of Bristol, VA passed away on Tuesday, October 27, 2020. He was born on March 24, 1926 in Fort Gay, WV, the son of Wayne and Eskie Riggs Ferguson. In addition to his parents, he was preceded in death by a daughter, Sabrina Ferguson; brothers, Harold and Frank Ferguson; sisters, Doris Finley, Dorene Simpkins and Wanda Maynard. George (Joe) served in the US Army during WWII, then joined the Navy. He often spoke of visiting other countries and sent souvenirs back to his younger siblings. Afterward, he worked for Life of Georgia Insurance Company. He was also a member of Bradley Street Baptist Church. Survivors include his wife, Leeta Taylor Ferguson; son, Daryl Ferguson and wife, Robynne; brother, Bill (Billie) Ferguson; sisters, Betty (Bill) Adkins, Glenna (Charles) Wellman and several nieces and nephews. The family would like to give a special thanks to his caregivers, Judy Smithson, Katherine Wingo, Roxanne Mullan and Karen Bowman. Due to COVID, a private graveside service will be held at Glenwood Cemetery. Condolences and memories may be left for the family at akardfuneralhome.com Akard Funeral Home, (423) 989-4800 is serving the Ferguson family.

The family of George E. (Joe) Ferguson created this Life Tributes page to make it easy to share your memories.

Send flowers to the Ferguson family.