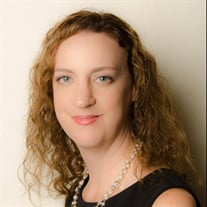 Ginna Suellen Stophel Kennedy, 44, passed away on Tuesday, July 31 at Navicent Health Medical Center in Macon, Georgia after an unexpected medical emergency. Mrs. Kennedy was a resident of Johnson City, TN. Mrs. Kennedy was a graduate of the University of Georgia School of Law and was in private practice in Johnson City before beginning her career in the nonprofit sector. She was a member of The Tennessee Bar Association and Blue Ridge Institute for Community Service Executives. While doing a law internship in the summer of 2003 in the Office of the District Attorney for the 2nd Judicial District of Tennessee in Blountville she met the love of her life, Attorney Andy Kennedy. They were married in July of 2006, and spent 15 years as soul mates, partners, and best friends. In addition to her husband, William Andrew Kennedy, she is survived by her mother, Sara Faircloth, of Milledgeville, Georgia; her Father, James E. Stophel, Jr and step-mother, Frances, of Walterboro, S.C. ; step-children, Kaylan Kennedy and Drew Kennedy, both of Knoxville; stepbrothers, Rhett and Kevin Mixon of Walterboro, S.C.; an Aunt, Ruth Stophel Newsome of Bristol; Mother-in-law Billie Warden of Blountville; Brother-in-law Randy Kennedy (Jonya, Matthew and Natalie); Uncle’s Rev. John Faircloth (Deborah) of Bowling Green, Ky; Thom Faircloth of Culpepper, VA; Cousins, Tom Faircloth (Kristin/Kayla) of Port Charlotte, Fl., Robert Faircloth (Helle/Damien) of Orlando, Fl, Rev. Elizabeth Faircloth DeWeese (Rev. Don/Abbye/Jesse) of Mesa, AZ, and Maggie Faircloth Gresham (Chet/Lucy) of Austin, TX. And a large and loving “family of choice” in the historic Tree Street neighborhood of Johnson City. She was preceded in death by her grandparents, Thomas and Virginia Faircloth of Dublin, Ga and James E. Sr. and Annie Riggs Stophel of Bristol, TN as well as her Uncle Robert Newsome of Bristol. Memorial gifts can be made to the Washington County Animal Shelter at http://wcjcanimalshelter.org Condolences and memories may be left for the family at akardfuneralhome.com Akard Funeral Home, (423) 989-4800 is serving the Kennedy family.

Ginna Suellen Stophel Kennedy, 44, passed away on Tuesday, July 31 at Navicent Health Medical Center in Macon, Georgia after an unexpected medical emergency. Mrs. Kennedy was a resident of Johnson City, TN. Mrs. Kennedy was a graduate of the... View Obituary & Service Information

The family of Ginna Suellen Stophel Kennedy created this Life Tributes page to make it easy to share your memories.

Send flowers to the Kennedy family.