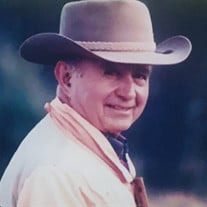 Grady Scott Hensley passed away peacefully at his home on Good Friday, April 2, 2021. He was preceded in death by his parents, General Scott and Lula Hensley, his brother, Cecil Hensley, son and daughter-in-law, Scott and Kathy Hensley, and his beloved wife of 68 years, Anna Lee Pullon Hensley. He is survived by his sister, Veda Rose Hensley Dossett, his daughter, Elizabeth Hensley Burford, and his grandson, Grady Scott Hensley, III, along with several nieces and nephews. Grady grew up on a farm 12 miles outside of Bristol without the convenience of electricity or telephones. In addition to farming, the family operated a store and a sawmill. Grady invited Jesus Christ to be his Lord and Savior at the age of twelve. He worked extra hours on the farm in order to have money to tithe, a practice he continued all of his life. As a teenager, Grady helped his father build homes for rent, but the renters often bought those homes, so they just built more. Grady enlisted in the United States Marine Corps in February 1945. He was stationed on the Midway, about to ship overseas, when the bombs were dropped on Hiroshima and Nagasaki, Japan in August of 1946. He received an honorable discharge and returned home to Bristol. He went to work for Chas J. Lowry Agency, Inc., a prominent real estate agency, as its first salesman, but soon found out that he would rather be building homes instead of selling them. He was a charter member of the Bristol Home Builders Association and served as its first president. On March 4th, 1949, Grady married his long-time sweetheart, Anna Lee. As Grady’s building business continued to grow, Anna Lee studied decorating and interior design and began putting the finishing touches on the interiors of Grady’s homes. As his reputation for quality grew, the focus of his building moved to fine custom homes and some light commercial work. Grady built his last home in 1999; however, real estate ads still refer to homes built by Grady Hensley as a sign of quality craftmanship. Grady and Anna Lee’s firstborn, Grady Scott Hensley, II, entered the world on September 29th, 1952. Their second born, Elizabeth Ann, came along May 7th, 1961. Grady was a devoted family man to his wife and children. When not working, Grady could be found in the field hunting. He was as legendary for his quail hunting prowess as he was for his building expertise. He began entering field trials in his later 70’s and has over 150 trophies and ribbons to show for it. He enjoyed training and working with his prize hunting dogs as much as he enjoyed the hunt itself. Those who hunted with him say it was the experience of a lifetime. Grady Scott Hensley was a man of the people. He was a true friend no matter your status in society. He was a Christian first, a devoted family man, a true craftsman, an exceptional sportsman and a gentleman. His quick wit and warm smile endeared all who knew him. He was a faithful member of State Street United Methodist Church for many years. While he leaves a void here on this earth, he is surrounded in heaven by the many that have passed before him. The family will receive friends from 5:00 – 6:00 P.M., Friday, April 23, 2021 in Akard Funeral Home Chapel with his daughter, Liz to give a eulogy at 5:30 P.M. The Celebration of his Life will be conducted at 2:00 P.M., Saturday, June 26, 2021 at State Street United Methodist Church. The family will receive friends in the atrium after the service. In lieu of flowers, memorials may be sent to Grady’s favorite charity, Salvation Army, 137 M.L.K. Blvd., Bristol, TN 37620. Condolences and memories may be left for the family at akardfuneralhome.com Akard Funeral Home, (423) 989-4800 is serving the Hensley family.

Grady Scott Hensley passed away peacefully at his home on Good Friday, April 2, 2021. He was preceded in death by his parents, General Scott and Lula Hensley, his brother, Cecil Hensley, son and daughter-in-law, Scott and Kathy Hensley, and... View Obituary & Service Information

The family of Grady Scott Hensley created this Life Tributes page to make it easy to share your memories.

Grady Scott Hensley passed away peacefully at his home on Good...

Send flowers to the Hensley family.