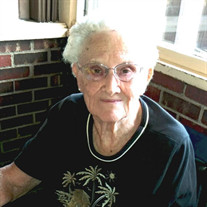 Helen Tallman Thomas, the family historian, got her wings to heaven on Tuesday, February 2,2021 at the age 92. Now she can tend to the flower beds in heaven. Born March 28, 1928 to Jack and Beatrice (Saul) Tallman of Cross Community in Bristol, TN. She was preceded in death by her husband, Walter M. Thomas (2003), who swept her off her feet and they were married on November 11, 1950. In September 1951, they had Sandra Kay Thomas Littlefield who passed in 2013. She was also preceded in death by her parents, her in-laws, Paul and Dorlusca (Minnick) Thomas; sister and brother-in-law, Jean and Corbett Moore; brother-in-law, Arthur Thomas. She was a graduate of Blountville High School and attended King College. Afterwards, she taught in Sullivan Co. After their marriage, She helped on the farm with her husband. Then in 1965 she started back in education with Washington Co., VA School System, first at Cleveland Elementary. After it closed, she was at numerous elementary schools and then Abingdon High School (1965-1998) and retired after 33 years. She was a member of Cross Methodist Church and attended Cold Springs Presbyterian Church. She loved working her numerous flower beds up until age 90. Always giving starts of flowers an bushes to friends for their yards to enjoy. After Walter died, there were numerous special people who helped her continue the family farm and so many she thought of as family; Bob and Brenda Reynolds, Ben and Bob Berry, Larry and Peggy Haworth, Bobby Eller, Thomas Pickel, Sean Hairston, Tommy Harmon, Bud Haworth, Ken Barger, Lee and Josh Reynolds, Jr Houser, Robert and Brad Byars, Eugen and Danny Gentry, Scott and Sean Thomas, Jr and Giz Gilmer, Ken Smeltzer and Mike Repass. (I am sorry if I left someone out) Left to cherish her memories are her youngest daughter, Donna Thomas Ostermeyer and Sonia Kiser North, who always called her momma Thomas; special friends, Sylvia Smeltzer, the girls from Dr. Greens’ office, nieces, nephews and cousins; her fur babies, Lula, Booboo and her grandpup, Gizmo; Drs. John Green, Lisle Whitman, Greg Griffith, Kelly Harris, Jean Mancini and Fred Gutherie. Due to her wishes, weather and COVID-19 there will be no formal visitation. Both Helen and her daughter, Kay will be celebrated at a later date. Memorials may be made to your charity of choice. Condolences and memories may be left for the family at akardfuneralhome.com Akard Funeral Home, (423) 989-4800 is serving the Thomas family.

Helen Tallman Thomas, the family historian, got her wings to heaven on Tuesday, February 2,2021 at the age 92. Now she can tend to the flower beds in heaven. Born March 28, 1928 to Jack and Beatrice (Saul) Tallman of Cross Community in Bristol,... View Obituary & Service Information

The family of Helen Marie Tallman Thomas created this Life Tributes page to make it easy to share your memories.

Helen Tallman Thomas, the family historian, got her wings to...

Send flowers to the Thomas family.