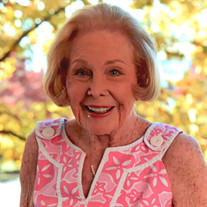 Helyn Link Dougherty, age 95, of Bristol, Tennessee, passed away on November 8. She was born on January 28, 1926 in Phoenixville, Pennsylvania, the daughter of the late James A. and Grace B. Link. In addition to her parents, she was preceded in death by her two daughters, Deirdre D. Grogan and Brennan D. Hodges; James J. Dougherty, Patrick B. Dougherty and brother, James A. Link. Ms. Dougherty graduated from Virginia Intermont College in Bristol, VA in 1945 and then returned to college in her mid-sixties, graduating Suma Cum Laude from East Tennessee State University with a major in philosophy and minors in history, business and social studies. She continued her studies at E.T.S.U. and earned a M.A. in Philosophy after doing thesis preparation at Oxford University and Cambridge University in England. She travelled extensively throughout her life and was an avid tennis player. She is survived by two sons, Patrick B. Dougherty (Patricia) and Shamas J. Dougherty, along with daughters Ronan D. King and Tara D. Murnane (Brian), seven grandchildren, Alyson G. Brooks (Kyle), Bryce D. Hodges (Lauren), Brennan M. Dougherty, William “Will” E. King III., Moseley K. Snyder (Cody), Ryan P. Dougherty (Lien) and Grace P. Murnane. She is also survived by son-in-law Ken Hodges and great grandchildren Connor and Amelia Brooks, Brennan Hodges and Kingsley Snyder. Ms. Dougherty is also survived by one sister, Margaret L. Kane. The family would like to extend special thanks to the wonderful workers who provided her excellent care. A committal service will be conducted at 4:00 p.m., Monday, November 15, 2021 at Glenwood Cemetery, Bristol TN, with The Reverend Joe Dunagan presiding. In lieu of flowers, memorial contributions may be made to the Bristol YMCA, 400 Martin Luther King, Jr. Blvd., Bristol, TN 37620 or the Viking Biking for Shamas program, c/o Tennessee High School, 1112 Edgemont, Ave., Bristol, TN 37620. Condolences and memories may be shared with the family and viewed by visiting www.akardfuneralhome.com. Akard Funeral Home, (423) 989-4800 is honored to be serving the Dougherty family.

Helyn Link Dougherty, age 95, of Bristol, Tennessee, passed away on November 8. She was born on January 28, 1926 in Phoenixville, Pennsylvania, the daughter of the late James A. and Grace B. Link. In addition to her parents, she was preceded... View Obituary & Service Information

The family of Helyn Link Dougherty created this Life Tributes page to make it easy to share your memories.

Send flowers to the Dougherty family.