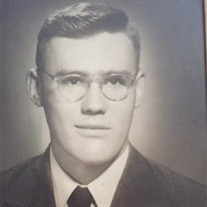 Henry Donald “Don” Preston, age 86, of Bristol, VA, died peacefully on November 2, 2019 after a brief illness at Bristol Regional Medical Center. The son of one of the earliest families of Washington County, VA. His entire life was devoted to his family, farm and cattle operations. He also spent some time as owner of an International Harvester dealership. A great baseball fan, a consistent winning bowler and a NASCAR follower, he enjoyed a rich life. He was a devoted member of First Presbyterian Church of Bristol, TN. Mr. Preston was the only child of the late Henry “Hal” Preston and Leta Wilson Preston of Bristol, VA. He was the tall striking and kind figure to all. His extended family was shaped by two marriages that he honored and cared for both women until their passing. He is preceded in death by his first wife, Nancy Ann Neal Preston and the late second wife, Marion Audrey Burress Preston. He is survived by three stepdaughters, Lara Colley Henard, Lantha Colley Quesenberry and Robin Colley, all of Bristol along with several grandchildren, nieces and nephews. Among his extended family with Mrs. Nancy Preston’s relatives are sister-in-law, Evelyn Dye of Crossville, TN., nephews and nieces, Dr. Robert Plummer and wife, Carol, Mrs. Jackie Neal Zieger and husband, Dr. Bill, Mike Neal, Dennis Neal and wife, Ann. He also leaves a great friend, Nancy Brown and many friends in the agriculture community. The family would like to extend a special thanks to the In-Home Services including, Diane Patrick, Mary Moore and others. Also special thanks to the team of ICU 4 at Bristol Regional Medical Center and Dr. Alona Crozier for their gentle care. Mr. Preston’s life will be celebrated at 2:00 pm, Wednesday, November 6, 2019 at Mountain View Cemetery with Rev. Sam Weddington officiating. In lieu of flowers the family requests that memorial gifts be made to First Presbyterian Church, 701 Florida Ave Bristol, TN 37620 or the Agriculture Program at John S. Battle High School, 21264 Battle Hill Drive, Bristol, VA. 24202 Condolences may be sent to the family at akardfuneralhome.com Akard Funeral Home, 1912 West State St., Bristol, TN (423) 989-4800 is serving the family of Mr. Preston.

Henry Donald &#8220;Don&#8221; Preston, age 86, of Bristol, VA, died peacefully on November 2, 2019 after a brief illness at Bristol Regional Medical Center. The son of one of the earliest families of Washington County, VA. His entire life was... View Obituary & Service Information

The family of Henry Donald "Don" Preston created this Life Tributes page to make it easy to share your memories.

Send flowers to the Preston family.