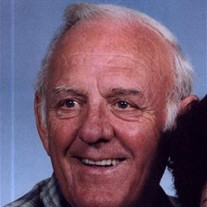 Jack Rutter, 85, of Blountville, Tennessee, formerly of Abingdon, Virginia and Lexington, Kentucky, passed away peacefully February 12, 2018 at Wellmont Hospice House as a result of a brief illness. Mr. Rutter was born in Washington County, Virginia on July 4, 1932 and was an alumni of Emory & Henry College where he played football. He was a former Virginia State Trooper, an Air Force veteran of the Korean War having proudly served his country both in Korea and Japan and was a certified pilot. He owned and operated his own business, Jack Rutter & Associates, from which he retired. He enjoyed playing golf, singing and music. One of his greatest joys was to serve as a Shriner and he had a great sense of fairness and empathy toward others. Jack’s parents, Marinda Francis Privett Rutter and Alvin Isaac Rutter, preceded him in death as well as the love of his life and wife of 25 years, Beverly Forrester Rutter, whom he missed dearly every day. Also preceding him in death was a sister, Sue Crawford; brother-in-law, Earnest Bishop; brother-in-law, W. Earl Gheelsling; nephew, Ernest Bishop, Jr.; and step-son, Chris Mahan. Jack is survived by his sisters, Virginia Bishop of Bluefield, West Virginia and Gladys Gheesling of Wichita, Kansas; niece, Robbin Gheesling, Kansas; niece, Patricia Herzog, Massachusetts; nephews, Mark Roman and H.P. Grant Gheesling, both of Kansas; step-daughters and sons-in-law, Teresa and Tom Lesnak, Blountville, and Susie and Jesse Jennings, Church Hill; sons, Dr. Michael A. Rutter, Nashville, Phillip Rutter and Dr. Jeffery Rutter and their families, all of middle Tennessee; several grandchildren including Kendall Harbour and husband, Justin Harbour, Katherine Lesnak, Nicholas Lesnak, Rebecca Lesnak and Bailey Jennings; special great-granddaughter, Everly Harbour, named for his beloved Beverly. The family of Mr. Rutter wishes to extend a special thank you to the nurses, technicians and staff of Floor 4W of Bristol Regional Medical Center for their wonderful care of him during his stay. Per Mr. Rutter’s wishes, a graveside service and burial will be held Friday, February 16, 2018 at 2:00 p.m. at Phillippi Cemetery, Mountain City, Tennessee with Rev. Clarence Dishman officiating. In lieu of flowers, donations may be made to the Christopher Todd Mahan Memorial Scholarship Fund, ETSU, University of Advancement, Attn: Christopher Todd Mahan Memorial Scholarship Fund, 1276 Gilbreath Drive, Box 70721, Johnson City, TN 37614, St. Jude’s Children’s Hospital or to the Shriners. Condolences and memories may be left for the family at akardfuneralhome.com Akard Funeral Home (423) 989-4800 is serving the Rutter family.

The family of Jack Rutter created this Life Tributes page to make it easy to share your memories.

Send flowers to the Rutter family.