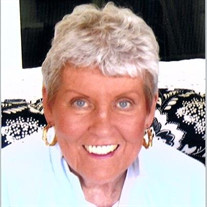 Jacqueline Fleenor Leonard passed peacefully into Christ’s eternal presence on Monday, November 19. Jackie was preceded in death by her husband of 58 years, Francis Lee Leonard, and parents, Henry Clarence and Virgie Mae Fleenor. She is survived by her children, Renee Kennedy (Dean), Robin North (Lee), Roger Leonard (Carol), and Russell Leonard (Kim); and her brother Dale Fleenor (Grace) and beloved twin sister Jerrie Stevens (Bill). Jackie is also survived by the grandchildren she treasured: Alec North, Benjamin Leonard, Caroline Leonard, Corrine Kennedy, Dylan Kennedy (Megan), Evan North, Isabel Leonard, Laura Leonard, Lili Kennedy, Lisa Kennedy and Meg Leonard. She is also survived by step-grandchildren Chris and Dena Jones, and Aaron and Cassie Kennedy, as well as her great-granddaughter, Nyra Jaiden Petrini. Jackie was born February 9, 1934, and raised in Washington County, Virginia. She attended Wallace High School and played on the basketball team. Following high school, she worked in the purchasing departments for Raytheon and Sperry. During this time, she was an avid bowler and played in a number of leagues. She was a devoted wife and mother to her family. She provided her husband, Frank Leonard, with $500 to start a company that would later become Electro-Mechanical Corporation. As a mother, she always supported her children’s activities and was active in the PTA at High Point Elementary School. She also volunteered innumerable hours for the Washington County Little League, Bristol Ballet, and Vance Middle School Band. Long before Jackie began her 12-year battle with cancer, she and her husband decided to make cancer the focus of their philanthropic activity. Jackie and Frank were founding supporters of the National Cancer Association’s Relay for Life program in Bristol. She and her family established the Leonard Family Comprehensive Breast Center and the Jackie Leonard Infusion Center at Bristol Regional Medical Center. She and Frank also partnered with their special friends J.D. and Lorraine Nicewonder to help purchase TrueBeam STx with Brainlab for the J.D. and Lorraine Nicewonder Cancer Center. She was a longtime supporter of the United Way of Bristol and had been a member of the Alex de Tocqueville giving society since its inception in 1998. In recognition of their support, Jackie and her family received the Jeff Byrd Spirit of Giving Award in 2013. Jackie was passionate about helping girls and young women reach their fullest potential through her support of Girls Incorporated and the YWCA. She was awarded an honorary lifetime membership in Girls Incorporated in 2013 and received the Steven Everhart Service Award in 1988. Jackie and her husband launched Girls Incorporated’s most successful fundraiser in 1984, the Friends Party, which will be in its 35th year in 2019. She was also a founding member of the YWCA’s Promise Society and a member of First Ladies. The YWCA’s Family Education and Training Center was named in Jackie’s honor, and she was recognized in the Tribute to Women program. The family wishes to acknowledge the outstanding care she has received through the years from the physicians, nurses, and staff at Bristol Regional and Holston Valley Medical Centers. We are especially grateful to her primary care physician, Dr. John Mann. She was blessed to have a marvelous team of loving caregivers whom the family adoringly referred to as her Care Angels: Stella Dougherty, Vivian Graham, Jennifer Phipps, Brittany Jones, Laura Kaylor, Brenda Malone, and Rose Taylor. The family is thankful to her longtime friends Patty Leonard and Mike Moore for their companionship and support over many years. Family and friends will gather to celebrate her life on Saturday, November 24, at State Street United Methodist Church, with visitation beginning at noon, followed by a Service of Death and Resurrection at two o’clock officiated by Rev. Jonathan Jonas. A private committal service with the family will follow. In lieu of flowers, you are welcomed to send a memorial to State Street United Methodist Church, the Comprehensive Breast Center at Bristol Regional Medical Center in care of the Ballad Foundation, Girls Incorporated, the Bristol YWCA, or United Way of Bristol. Condolences and memories may be left for the family at akardfuneralhome.com Akard Funeral Home, (423) 989-4800 is serving the Leonard family.

The family of Jacqueline (Jackie) Fleenor Leonard created this Life Tributes page to make it easy to share your memories.

Send flowers to the Leonard family.