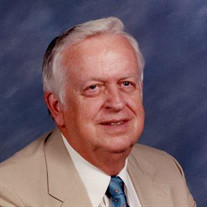 James Edward Carlson, 83, of Bristol VA went to be with his heavenly father following declining health on February 15th at Bristol Hospice House surrounded by his family. Jim was born in Bristol, VA, February 8, 1935 to Edward Jackson Carlson and Beatrice Smith Carlson. He is preceded in death by his parents and brother, Glen Jackson Carlson. A tireless provider for his family; Jim worked in industry for 27 years as a Quality Control Supervisor of Monroe Calculator Machine Co. and then ITT North Electric. In later years he was an Insurance Manager for Huffcook / Settlers Insurance Co. Jim was a past member of the Industrial Management Club, past member of the Bristol Life Saving Crew and a member of State Street United Methodist Church. He is survived by his loving wife of 61 years, Marjorie Carlson. They both graduated from Virginia High School and met there. Jim was always the guiding force and protector in their marriage but their roles were reversed later when Marjorie became his ‘nurse’ and protector during recent years of failing health. He always wanted her by his side. Jim never met a stranger and was always quick to share a story, often with a humorous twist. He was mechanically inclined and artistically gifted. He passed those talents along to his children and grandchildren. His greatest pride and joy was his family. In addition to his wife Marjorie, Jim is survived by daughters, Diane Curcio and husband, Pete and Kim Clark and husband, Brad; grandchildren: Nick and wife, Erin, Joey, Abby and Katie Curcio; Allen and Shelley Clark; great-grandchildren: Charlie, Ben and Michael Curcio and several nieces and nephews. The family will receive friends from 2:00 - 4:00 P.M., Sunday, February 18, 2018 at Akard Funeral Home. A private family graveside service will be in Mountain View Cemetery. In lieu of flowers, the family requests contributions to Wellmont Hospice House, 1 Medical Park, Bristol, VA 37620 or State Street United Methodist Church, 300 W. Valley Dr., Bristol, VA 24201 Condolences and memories may be left at akardfuneralhome.com Akard Funeral Home (423) 989-4800 is serving the Carlson family in this time of loss.

The family of James Edward Carlson created this Life Tributes page to make it easy to share your memories.

James Edward Carlson, 83, of Bristol VA went to be with his heavenly...

Send flowers to the Carlson family.