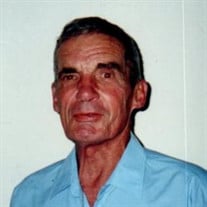 Sgt. First Class (Ret.) James Harold “Sarge” McFalls made his heavenly flight from Wellmont-Bristol Regional Medical Center, Saturday, November 25, 2017 at the age of 84. Sarge was born May 11, 1933 in Inman, VA to Jonas and Callie Williamson McFalls who preceded him in death as well as his stepmother, Leona Cross McFalls. Also, preceding him in death was his daughter, Jamie Renee McFalls; brothers, Fred, Clyde and Omar McFalls; sisters, Hazel Mowelll, Helen Herron, Mildred Davis and Wilma Howell. At the present, Sarge had been doing one of his favorite things by preforming in Annie with Theatre Bristol, having done about 21 shows with them. He held an Associates Degrees from Virginia Highlands Community College in Marketing and in Management earned simultaneously on the GI Bill in 1997. Sarge served his country with the United State Army for 35 years, retiring in 1991 when his children honored him with a memorial paver in Cumberland Park. After military retirement, Sarge worked for Fingerhut and Food City until his final retirement date in the early 2000’s. He also worked with the Board of Elections serving in the First Precinct of Bristol, VA for many years. Sarge played softball with First Christian Church many years and played and umpired Senior League Softball. He attended Anderson First Church of God and lastly Abingdon First Church of God serving as Sunday School teacher and worship leader at each. He loved to write and sing gospel songs and for many years traveled around singing at various gatherings. Many times his silver truck would be parked along the roadside where he gathered berries in late spring and early summer. In the fall, he gathered black walnuts having mastered cracking them and getting them out in large pieces. He is survived by his wife of 58 years, Lucinda “Cindy” Mortimore McFalls; son, Jeffery McFalls; sisters, Betty Messer of Bristol, VA, Mary Lee Kimberlin of Dalton, GA and Marie Pleasant of Big Stone Gap, VA along with a score of nieces, nephews and cousins. The family thanks the Wellmont – Bristol ER, Chaplain Don Snowden and all thoses who called and came to the home with food, comforting words and prayers. The funeral service will be conducted at 7:00 P.M., Thursday, November 30, 2017 in Akard Funeral Home Chapel with Dr. Robert Neace officiating. Honorary pallbearers will be fellow berry gatherer and friend, Dr. Thomas Green, the men of the Church of God, friends and neighbors on Pineview and Westfield Subdivision and four very special nephews, Dempsey, Darrell and Tony Messer, Jimmy Lee Mowell and niece, Barbara Tyree. The committal service and interment will be conducted at 11:00 A.M., Friday in Mountain View Cemetery with Military rite conducted by the Bristol VFW Honor Guard. The family will receive friends from 4:00 – 7:00 P.M., Thursday prior the service. Memorials may be made to Abingdon First Church of God Building Fund, 500 White’s Mill Road, Abingdon, VA 24210 or Theatre Bristol, 512 State St., Bristol, TN 37620. Condolences and memories may be left for the family at akardfuneralhome.com Akard Funeral Home, (423) 989-4800 is serving the McFalls family.

The family of James Harold "Sarge" McFalls created this Life Tributes page to make it easy to share your memories.

Send flowers to the McFalls family.