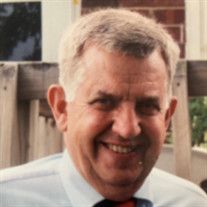 James Allison Mullins reunited with the love of his life of 60 years, Mona, on Thursday, April 9, 2020 after a long and courageous battle with Alzheimer's at his home in Bristol, VA. Alzheimer's met its match with Jim as the disease took so much from him, but he refused to let it take his sweet smile, heart and his love for people. Jim was born January 21,1935, in Clintwood, VA, to the late, Lawrence and Marie Mullins. He excelled in academics, sports and politics at Clintwood High School. He was class Valedictorian, President and a talented athlete. He was a friend to so many in his youth, that charisma promised and led to a very bright future in teaching and politics. He was a veteran of the Korean War. He earned a bachelor’s and master’s degree from East Tennessee State University. It was in Johnson City that Jim and Mona started a family. Shortly after they moved to Richlands, VA, where Jim started his primary career that he loved, teaching young people at Richlands High School, Richlands Middle School and Southwest Virginia Community College. His love for teaching young people won him many state and national awards. Jim appeared in Time and Newsweek magazine as he earned The State Farm Insurance Teacher of the Year award in 1993. From 1976 to 1982, James was special assistant to Congressman William C. Wampler Sr. He became known as the black lung man throughout Southwest Virginia because he helped so many get their government benefits. Jim loved people and could never turn away anyone in need. In his free time, he was also called Coach and Dad, as he and Mona were raising a family. After his career in the United States House of Representatives ended, Jim returned to Richlands and was a teacher until he retired. He was an avid supporter and fan of the University of Tennessee, he loved taking his boys to Neyland Stadium in the fall. After his retirement, he authored four books with the help of his cousin, Judy Davenport and Ginger Mullins at Universal Printing. All of his books were for nonprofit as he loved to give them to friends and family. Jim is survived by his oldest son, James Vincent Mullins and wife, Donna of Tazewell, VA; son, Douglas Allison Mullins of Bristol, TN; grandson, Aarron and wife, Erin and great-granddaughter, Amelia and great-grandson, James Elijah Mullins, all of Johnson City, TN; granddaughter, Aimee Mullins and fiancée, Bryce Barker of Johnson City, TN; his sisters and brothers-in-law, Mary and Harvey Hartsock of Clintwood, VA, Barbara and John Mullins of Fredericksburg, VA and Betty and Walter Hancock of Appomattox, VA, as well a host of nieces, nephews, cousins and a cat named Patches. Jim is reunited in Heaven with his lovely wife, Mona, his mom and dad, grandparents, a host of aunt, uncles, cousins, friends and his sweet younger sister, Linda Delaney. What a reunion that must be! Jim's legacy can be defined as faith, family and love for his fellow man. You never saw him without that signature smile. With a new body and ability to walk and talk again, we can only imagine Jim running, jumping and starting a conversation with everyone he meets with that radiant smile that could always overtake a room and make you feel special. As his high school yearbook read "Wherever Jim sits, will always be the head of the class. " The family would like to give special thanks to his caregiver the past 3 years, Brittany Berry, Oh, how he loved her and she loved him, friends at Christian Care Center, the staff at Ballad Health and Ballad Hospice for helping him complete his journey. Jim would want everyone to know not to be sad, but to rejoice and celebrate for he is in the arms of the Lord. His pain, struggles and battles are over. Thursday morning in Heaven, he walked in with so much humbleness, character, compassion and love for people. He's home. Sure, going to miss you Dad. Doug and Vince love you. Run fast and fly high, you sure do deserve it. Kiss and hug mom for us. Thank you for being our Dad. You taught us how to be Men of God but we will never be able to do it like you did. "We will get through this together", a phrase you always used sure does seem appropriate today. In lieu of flowers, the family would like to ask for donations be sent to the Alzheimer's Association in East Tennessee and Southwest Virginia. Because of the Covid-19 outbreak, the family has chosen to do a Celebration of Life Ceremony at a later date. Pastor Lynn Vanover, his friend and classmate since childhood, will officiate the private graveside service at Forest Hills Memory Gardens in Abingdon, on Monday, April 13, 2020. Condolences and memories may be left for the family at akardfuneralhome.com Akard Funeral Home, (423) 989-4800 is serving the Mullins family.

James Allison Mullins reunited with the love of his life of 60 years, Mona, on Thursday, April 9, 2020 after a long and courageous battle with Alzheimer's at his home in Bristol, VA. Alzheimer's met its match with Jim as the disease took so... View Obituary & Service Information

The family of James Allison Mullins created this Life Tributes page to make it easy to share your memories.

James Allison Mullins reunited with the love of his life of 60...

Send flowers to the Mullins family.