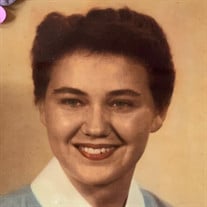 Janice Lee Gobble Harry, 89, passed away after a period of declining health on Monday afternoon, February 18, 2019 at Bristol Regional Medical Center with her friend, Crystal was by her side. Janice Harry was born in Bristol, Virginia, on July 5, 1929, the third of six children to Paul Samuel Gobble and Grace Goodman Gobble. Janice was gifted with many talents in her lifetime; she was athletic, intelligent, and artistic. She loved writing, drawing, and painting. At Virginia High School, she became a natural leader with her dry wit, had many friends, and was a member of the girls’ basketball team. After graduating in 1947, she devoted several years to mastering the art of cake decorating and became the primary wedding cake designer at her father’s bakery, Peter Pan Pastry Shoppe, in downtown Bristol. Yearning to grow intellectually, she earned her associate degree in nursing at Virginia Intermont College, also in Bristol. After graduating, she began her nursing career in the emergency room at Bristol Memorial Hospital. Later, after a family move to Pensacola, Florida, she continued her career as a nurse and gravitated to the surgical unit at the local hospital. Janice relocated to Tazewell, VA in that year and continued to excel in surgical nursing. There she met and married Clarence R. Harry, a successful Tazewell businessman. She and Clarence lived on a hilltop in Tazewell surrounded by land, cows, and a German Shephard. Janice relished being at home, enjoyed good food and was an accomplished cook. She was a charismatic force and loved to laugh. The couple spent much of their free time traveling to Europe, Las Vegas, and Myrtle Beach. Janice valued hosting and doting on her many nieces, and nephews, whom she and Clarence taught to play pool and interact with their cows. The couple later moved to Bristol, TN, and cultivated a love of golf and trips to the beach. After the death of her husband in 1983, Janice’s canine became her constant companion. She relished many extended visits with her dear brother Harold (and wife Sandra) at their home in Michigan. Janice was an adventurous spirit and also loved the numerous escapades she shared with her sisters. They laughed, played golf, journeyed to the beach, and embarked on several cruises. Janice adored her family, and spent many hours babysitting her nieces and nephews, spoiling them at home and on trips. She took pleasure in sewing, crafting, and created christening gowns and stuffed animals for them. She loved her nieces and nephews as her own children. Janice Harry loved greatly and gave much in her full life. She is preceded in death by her parents, husband, two sisters, Margia Gobble Wiggins and Francis Gobble Atkinson, and brother Paul Samuel Gobble, Jr. Her surviving family includes brother Harold Graves Gobble, wife Sandra, sister Nancy Gobble Holloway, many nieces and nephews, grandnieces and grandnephews, cherished friends, and her beloved dog Honey. The family wishes to offer a special thank you to Sheila Blanchard, and most especially to Crystal Nelson, for the exceptional loving care, patience, and kindness they provided to Janice. Also, thank you to the many special neighbors who assisted with errands and dog walking. A memorial service will be held at 2:00 P.M., Sunday, March 3, 2019 in Akard Funeral. Immediately after the service, a gathering will be held at The Bristol Hotel until 5:00 P.M. In lieu of flowers, please consider a contribution to a favorite charity in honor of Janice Harry, or to the Justin A. Holloway Scholarship Fund (Newton-Conover Education Foundation, NC). Condolences and memories may be left for the family at akardfuneralhome.com Akard Funeral Home, (423) 989-4800 is serving the Harry family.

Janice Lee Gobble Harry, 89, passed away after a period of declining health on Monday afternoon, February 18, 2019 at Bristol Regional Medical Center with her friend, Crystal was by her side. Janice Harry was born in Bristol, Virginia, on July... View Obituary & Service Information

The family of Janice Lee Gobble Harry created this Life Tributes page to make it easy to share your memories.

Janice Lee Gobble Harry, 89, passed away after a period of declining...

Send flowers to the Harry family.