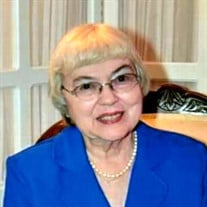 But as for me, my contentment is not in wealth, but in seeing you and knowing all is well between us. And when I awake in Heaven, I will be fully satisfied for I will see you face to face. (Psalm 17:15 - The Living Bible) Jean Harrison Eller, age 78, died on October 5, 2017 after a short battle with cancer. She was a loving and beloved wife, mother, grandmother and great-grandmother, whose pride and joy were her great-grandchildren. Jean was born on November 27, 1938 to Roscoe F. and Margaret K. Harrison. She attended Virginia High School and the University of Tennessee. She was preceded in death by her parents, Roscoe F. and Margaret King Harrison and sister, Fran Hodges. She is survived by her husband of 58 years, Buddy J. Eller; two daughters, Kathy Humphrey and Tammy Wright and husband Steve; two grand-daughters, Christine McKenzie and husband Calvin and Laura Jones and husband, Seth; four great-grandchildren, Moira McKenzie, Ian McKenzie, Zoe Jones, and Nora Jones; sister Ruth K. Crowell and brother, Roscoe F. Harrison, Jr. and wife Betty; numerous nieces and nephews and great-nieces and nephews and Brittany Humphrey Marcus. Jean had a great capacity for love, which she generously shared with her family and friends. She touched many lives with her strong Christian faith and heart for serving. Jean served humbly and cheerfully in many capacities throughout her life, both in her career and volunteer activities: She worked at the Bristol Housing Authority for 26 years and after retiring went back to work as the Executive Secretary for the Bristol Life Saving Crew. She was a Life Member of the Bristol Life Saving Crew Crewettes . She served as Chaplain and Parliamentarian to the Virginia Association of Rescue Squads Auxiliaries and served on the organizational committee for the Tennessee Association of Rescue Squads Auxiliaries and as Parliamentarian. She became the first female Emergency Medical Technician Instructor in Southwest Virginia and served as captain of the first female first aid team from the Bristol Life Saving Crew to enter and place in state competition. Jean was a Red Cross First Aid Instruction and Board member of the Mt. Empire Chapter of the American Red Cross. She joined the local Disaster Response Team of the American Red Cross and served ten years as Disaster Course Instructor and Co-coordinator of the Red Cross Disaster Services in Southwest Virginia and was a member of the Virginia/D.C. Disaster Committee. In 1999 she received the Clara Barton Volunteer Award for Meritorious Volunteer Leadership to the American Red Cross. Jean was a member of the organizational committee for Bristol Habitat for Humanity and a Board member of Holston Habitat for Humanity. She received the Runner-up award for the Virginia Governor’s Award for Volunteering Excellence in 1988 and the Bristol YWCA “Tribute to Women” Award in 2000. She, along with her husband, was awarded the Bristol Mayor’s Award of Distinction in 2011. Jean was a member of First Presbyterian Church for over 65 years teaching Sunday School and serving as a Deacon as both secretary and Chairman of the Board of Deacons, followed by two terms as an Elder. She also attended Celebration Church where she helped in the Kitchen Ministry. A graveside service will be held Monday, October 9, 2017 at 11:00 am at Mountain View Cemetery, The Rev. Robert Russell, presiding. There will be no formal visitation but a Celebration of Jean’s life will be held immediately following the service in the Fellowship Hall at Pleasant View United Methodist Church, 18416 Lee Highway, Abingdon VA and all are invited to attend. Friends and family may also stop by the house at any time. In lieu of flowers, contributions may be made to Fellowship of Christian Athletes, P.O. Box 16757, Bristol VA 24209 or Memorial Foundation Hope Lodge, 2008 Charlotte Avenue, Nashville, TN 37203. Condolences may be left for the family at akardfuneralhome.com Akard Funeral Home, (423) 989-4800 is serving the Eller family.

But as for me, my contentment is not in wealth, but in seeing you and knowing all is well between us. And when I awake in Heaven, I will be fully satisfied for I will see you face to face. (Psalm 17:15 - The Living Bible) Jean Harrison Eller,... View Obituary & Service Information

The family of Jean Harrison Eller created this Life Tributes page to make it easy to share your memories.

But as for me, my contentment is not in wealth, but in seeing...

Send flowers to the Eller family.