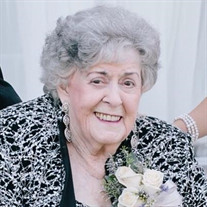 Jeanne Laverne Thompson Hurt is the daughter of Dorothy Lin Thompson and Gene “Pappy” Thompson, the legendary sports editor of the Bristol Herald Courier for more than 50 years and the namesake of the annual Pappy Thompson Award. A “daddy’s girl,” young Jeanne would often be found at the newspaper office, sometimes fielding calls on Friday night from readers seeking high school football game scores. She doted on her younger brother Dick. Her parents divorced and both remarried, resulting in more beloved brothers and sisters: Gail, Linda, Susan, Beth, Gary, and Kay Thompson, John and Bobby Marion. A vivacious beauty, Jeanne was crowned Miss Tennessee High in 1949. Shortly after gaining a job as an operator at Bristol Steel and & Iron Works, she caught the eye of Otis Hurt, an ambitious young Bristol Steel accountant. Six weeks later they married. As Otis made his way to the top of the corporate ladder at Bristol Steel, Jeanne focused on their four children, Nancy, Mark, Lynn and Eric. It was a tennis family, with the children following the lead of their dad, a standout tennis player in the Tri-Cities for more than 40 years. Jeanne was their biggest fan and supporter, attending every tournament match, and supporting every other endeavor that Otis and each child pursued. Each year she was a home room mother and constant presence at school. Jeanne was also a key supporter of children’s theatre, particularly when one of her children was in the cast. Every Sunday the family was found at Central Presbyterian Church, where Jeanne taught Sunday School to toddlers. All the children married: Nancy to petroleum geoscientist Paul Schlirf; Lynn to Charlotte financial advisor Jim Davis; Mark to Rhonda, a Bristol girl; and Eric to Tara, a fellow JMU graduate; 14 grandchildren followed: Laura and John; Lauren, Alex and Thomas; Leah, Vic and Eve; Rylie, Mason, Griffin, Kane, Colby and Brogan. Affectionately called “Granny,” Jeanne quickly became an essential part of each grandchild’s life. Babysitting, picking them up from school, helping with homework, but above all giving each in turn her undivided attention, enthusiastic support and unconditional love. With the love of family central to her life, Jeanne developed a lifelong passion for genealogy. In the days before the internet, it was pouring through dusty courthouse records and corresponding in longhand with fellow enthusiasts. Over the years, the puzzles were solved and the family tree revealed. Along the way, Jeanne gathered family stories from her research that she was delighted to pass on to her children and grandchildren every chance she could get. She was a proud member of the Daughters of the American Revolution and Daughters of the Confederacy, and tried to attend every annual convention of the Speake Family Association. Jeanne spent her final years at English Meadows in Abingdon, where she was a favorite with the staff and other residents, including special friend Phillip. Living close by, Mark’s wife Rhonda was a frequent visitor and caregiver of Jeanne’s at English Meadows and thought of Jeanne as a second mother. Even with her full social life there, Jeanne still found the time to keep up with the latest of each of her children and grandchildren. After a short illness, Jeanne died on December15. Until the end, it was constant phone calls and visits with their beloved mother and Granny to tell her the latest news and receive the inevitable word of encouragement and love. Her passing has left a void in all of their lives, but with the consolation of a lifetime of wonderful, sustaining memories. A memorial service will be conducted at 2:00 P.M., Saturday, February 24 at Central Presbyterian Church. Please join Jeanne’s family as they celebrate her life. In lieu of flowers please make a donation to Healing Hands Health Center, 245 Midway Medical Park, Bristol, TN 37620. healinghandshealthcenter.org or Central Presbyterian Church, 301 Euclid Ave., Bristol, VA 24201 at cpcbristol.org. Condolences and memories may be left at akardfuneralhome.com Akard Funeral Home of Bristol, Tennessee, is serving the family in this time of loss.

Jeanne Laverne Thompson Hurt is the daughter of Dorothy Lin Thompson and Gene &#8220;Pappy&#8221; Thompson, the legendary sports editor of the Bristol Herald Courier for more than 50 years and the namesake of the annual Pappy Thompson Award.... View Obituary & Service Information

The family of Jeanne Laverne Hurt created this Life Tributes page to make it easy to share your memories.

Send flowers to the Hurt family.