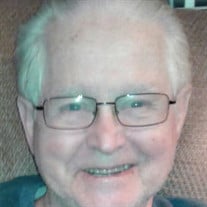 Jimmy Ferd Fletcher, age 86, died peacefully at home on Friday night, January 7, 2022 with his wife by his side. Born on December 23, 1935, he was the youngest child of Ferd and Bina Mae Fletcher. He was a 1954 graduate of Bristol Tennessee High School, where he took much pride and pleasure in playing clarinet in the high school band. He continued his education at East Tennessee State College (now University), graduating with a degree in accounting and economics. Later he took additional courses at North Texas State College and at TCU in Arlington, Texas. During this time Jimmy worked as a factory inspector at Convair Aircraft Corporation in Fort Worth, Texas. He then entered the United States Army, where he served as company clerk, supply clerk, and mail clerk at high security units posted at Camp Wolters in Mineral Wells, Texas and at Fort Huachuca in Arizona. He was very proud of his military service, serving from April 1959 through April 1962. Jimmy returned to Bristol after his military discharge and began his accounting career with Carl Moore Enterprises. From there he moved on to a position as an accountant at Sperry Corporation (now Unisys). He remained there for twenty-four years. After the plant’s closing, he spent nine years as the commercial teller for Dominion Bank (which became First Union, then Wachovia, and now Wells Fargo). He retired from there at the age of 65 when it was still under the Wachovia name. Jimmy grew up fishing the area lakes with his family, and he also enjoyed traveling the country with them. He was a member of First United Methodist Church and was also a member of the local Mensa group in his younger years. In later years he took great pride in remodeling the family homeplace and treasured being able to spend quality time with his wife and feline companions. He is survived by his wife, Sharon Emmert Fletcher, his two sisters, Mary Griffiths of Georgetown, Texas and Mae Crum of Weatherford, Texas, nephews Mike Pratt and Kenneth Crum, niece Patti Mayward, several cousins, and his wife’s extended family. He will be greatly missed by them all. In accordance with Mr. Fletcher’s wishes, there will be no formal memorial service and a private interment in the columbarium at Glenwood Cemetery will be held in the spring. Memories and condolences may be sent to the family at akardfuneralhome.com and memorial gifts may be sent to the church or charity of your choice.

Jimmy Ferd Fletcher, age 86, died peacefully at home on Friday night, January 7, 2022 with his wife by his side. Born on December 23, 1935, he was the youngest child of Ferd and Bina Mae Fletcher. He was a 1954 graduate of Bristol Tennessee... View Obituary & Service Information

The family of Jimmy Ferd Fletcher created this Life Tributes page to make it easy to share your memories.

Send flowers to the Fletcher family.