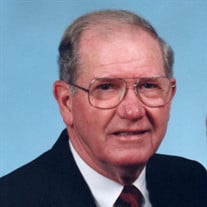 John W. Tuell, age 86, of Bristol, VA passed away Tuesday, February 7, 2017 at Bristol Regional Medical Center. He was born on April 16, 1930, the son of the late R.E. and Carrie Johnson Tuell. John was a lifelong resident of Bristol, Washington Co., Virginia and a graduate of Wallace High School. He was a member of the Methodist faith and a veteran of the U.S. Army serving during the Korean conflict. John was also preceded in death by his brothers, Sam and Edgar Tuell. John was a very astute business man. He worked for Valleydale and Elm Hill before opening his own brokerage firm called Blue Ridge Brokerage. He also owned the Burger Bar during the 1960’s. He was also very involved in the community. He was a member of the Shriners and was always involved in their fundraising efforts for the Shriner’s Hospital. John also served as the Grand Patron of the Eastern Star for the state of Tennessee. He was a 32nd degree Mason. John had a beautiful tenor voice and sang in the church choir for many years. He also sang in weddings and funerals too numerous to count, he took great pride in singing and always brought such joy to those who heard him. He also loved the game of golf and was a very accomplished golfer. Survivors include his wife of 65 years, Peggy Williams Tuell; his sister, Linda Tuell Steight and husband, Roger and several nieces and nephews. The funeral service will be conducted at 7:00 P.M., Thursday, February 9, 2017 in the Akard Funeral Home Chapel with Rev. Ralph Kidd and Rev. Barbara Doyle officiating. Music will be loving provided by Becky Muller and Norma Rollins. The Committal service and interment will be conducted at 11:00 A.M., Friday in Mountain View Cemetery. Honorary pallbearers will be Dale Fleenor, Jim Eller, Mike Rudd, Jack Rohr, Mike Ohlson, Randy Rohr, Nick Lenaeus, Dudley Senter and Roger Trinkle. The family will receive friends from 5:00 – 7:00 P.M., Thursday prior to the service. The family would like to thank Vonda Wingate, Angela Rudd, Debbie Ohlson, Suzanne Senter and his many friends for all their love and support during this time. Memorials may be sent the Shriner’s Hospital or the Eastern Star or a charity of one’s choice. Condolences and memories may be left for the family at akardfuneralhome.com Akard Funeral Home, (423) 989-4800 is serving the Tuell family.

John W. Tuell, age 86, of Bristol, VA passed away Tuesday, February 7, 2017 at Bristol Regional Medical Center. He was born on April 16, 1930, the son of the late R.E. and Carrie Johnson Tuell. John was a lifelong resident of Bristol, Washington... View Obituary & Service Information

The family of John W. Tuell created this Life Tributes page to make it easy to share your memories.

Send flowers to the Tuell family.