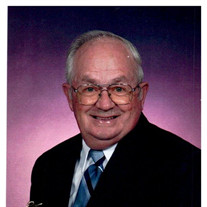 John F. “Sonny” Wolford, age 89, passed away Saturday, February 18, 2017 at NHC of Bristol, VA after a lingering illness. He was the son of the late John P. and Aura Lee Wolford. He was born and raised in Sullivan County. He was a member of Cassidy United Methodist Church, Kingsport, TN. He was a former employee of Fred Ford Auto Sales and Bus Company. He liked to work on the farm and later as a bus driver for M&M Bus Company, Kingsport, TN. He was preceded in death by his devoted wife of 59 years, Anna Lee Wolford; sisters, Dorothy Ross, Sue Baker and Ruth Rodgers. He is survived by his daughter, Linda Wolford; sons, John F. Wolford, Jr. and wife, Becky, Michael Wolford and wife Angela; 11 Grandchildren and 17 Great-Grandchildren; sister, Mary Lou Smith and several nieces and nephews. The family would like to extend a special thanks to his friend, Gene Camper and nephew Johnny Ross for their concern and many visits during Sonny’s illness. Also to NHC Health Care of Bristol and their employees and staff. They were very special to Sonny and many thanks for their love and concern. The funeral service will be conducted at 7:00 pm, Tuesday, February 21, 2016 in Akard Funeral Home Chapel with Rev. Tom Hancock officiating. Entombment will be at 11:00 am , Wednesday, February 22, 2016 in Mountain View Cemetery Mausoleum. The family will receive friends 5:00 – 7:00 pm prior to the service. In lieu of flowers memorials may be made to Cassidy United Methodist Church, 5801 Memorial Blvd, Kingsport, TN 37660 Condolences and memories may be sent to the family at akardfuneralhome.com Akard Funeral Home, 1912 West State St., Bristol, TN (423) 989-4800 is serving the family of Mr. Wolford.

The family of John F. "Sonny" Wolford created this Life Tributes page to make it easy to share your memories.

Send flowers to the Wolford family.