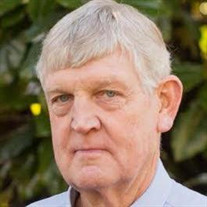 Joseph Henry Kurre, Jr., (Joe) passed away peacefully at home on Monday, October 19th, soon after his 77th birthday. Joe was born in Louisville, KY, in 1943 to Joseph Henry Kurre and Mary Lewis Foley. He was raised in Owensboro, KY, the oldest of five children, and attended Owensboro Catholic High, where he made friends that would last his lifetime. He graduated from the University of Kentucky and the University of Louisville Medical School, completing his surgical internship at Cook County Hospital in Chicago, IL, and his surgery residency at Emory University in Atlanta, GA. Joe married Barbara Sue Lacy in 1969 and they settled in Bristol, TN. He worked as a general surgeon at Bristol Regional Medical Center, and dedicated over three decades to the health and well-being of the Bristol community. He is preceded in death by his father and mother, his sisters, Mary Margaret Kurre, and Jane Elliott. He is survived by his loving wife, Barbara Sue Kurre; his daughters, Elizabeth Burriss (William) of Bristol, TN, and their children William, Joseph, and Sara; Jennifer Weber (Matthew) of Atlanta, GA, and their children Henry and Owen; and Kathryn Berkenpas (Eric) of Richmond, VA, and their children Ella Mae and Joshua; as well as two siblings, his brother John Kurre (Edna) of Baltimore, MD; and his sister Martha Kurre House of Owensboro, KY. Known as Joey or Bud to those closest to him, he loved to play golf, spend time near the ocean, and follow his Kentucky Wildcats. He also enjoyed the company of his family and friends, most of all his girls, Barbara Sue, Elizabeth, Jennifer, and Kathryn who never doubted how much he cherished them. The Funeral Mass for family and friends will be held at 2:00 P.M., Friday, October 23, 2020 at St. Anne Catholic Church with Father Chris Hess officiating. In lieu of flowers, the family asks donations to be made to The Leukemia & Lymphoma Society, Donor Services, PO Box 98018, Washington, DC 20090-8018. Condolences and memories may be left for the family at akardfuneralhome.com Akard Funeral Home, (423) 989-4800 is serving the Kurre family.

Joseph Henry Kurre, Jr., (Joe) passed away peacefully at home on Monday, October 19th, soon after his 77th birthday. Joe was born in Louisville, KY, in 1943 to Joseph Henry Kurre and Mary Lewis Foley. He was raised in Owensboro, KY, the oldest... View Obituary & Service Information

The family of Joseph Henry Kurre Jr. created this Life Tributes page to make it easy to share your memories.

Send flowers to the Kurre family.