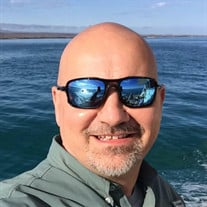 Kevin Wayne Blaylock, age 44, of Bristol, VA passed away on Saturday, June 17, 2017 at his home. He was a native and lifelong resident of the Bristol area. Kevin was a graduate of John S. Battle High School and King College with a double major in History and Political Science. Kevin was the C.E.O. and owner of Surf and Dirt in Bristol. He served as treasurer, trainer, and co-led the Step-up programs at Phoenix Landing. Phoenix Landing is a volunteer/non-profit organization dedicated to the welfare of parrots and other exotic birds. He served as coordinator for the Abingdon area and as an officer in the Bristol Host Lions Club since 2010. Kevin was always looking for ways to help others. Because of his selflessness others will benefit from his organ donation. Kevin was a longtime world traveler and an amazing photographer. He had a passion for nature and what God provided. Kevin fulfilled one of his bucket list items by traveling to the Galapagos Islands last year photographing and experiencing the exotic animals in their natural habitat. He was a member of Euclid Avenue Baptist Church. Survivors include the love of his life and best friend, Kami Blaylock; his pride and joys, son, Chandler Blaylock; daughter, Madison Blaylock; his parents, Jerry and Linda Blaylock; in-laws, Bud and Dot Bolling; siblings, Mark Blaylock, Duane (Lisa) Blaylock, Sharon (Leon) Duckett, Darryl (Misty) Blaylock and Andrea (Shannon) Leonard; brother-in-law, Terry (Linda) Bolling; and several nieces and nephews who adored him greatly. The funeral service will be conducted at 7:30 P.M., Wednesday, June 21, 2017 in Akard Funeral Home Chapel with Dr. Allen Roberts officiating. The committal service and entombment will be conducted at 2:00 P.M., Thursday in Mountain View Cemetery. Pallbearers will be Rusty Street, Dustin Peters, Mark Blaylock, Darryl Blaylock, Duane Blaylock, Terry Bolling and Tim Sant. Honorary pallbearers will be Jerry Blaylock, Bud Bolling, Surf & Dirt family, Phoenix Landing family and the members of the Bristol Host Lions Club. The family will receive friends from 4:30 -7:30 P.M., Wednesday prior to the service at the funeral home. In lieu of flowers, memorials may be sent to Phoenix Landing, P.O. Box 1233, Asheville, NC 28802 Condolences and memories may be left for the family at akardfuneralhome.com Akard Funeral Home, (423) 989-4800 is serving the Blaylock family.

Kevin Wayne Blaylock, age 44, of Bristol, VA passed away on Saturday, June 17, 2017 at his home. He was a native and lifelong resident of the Bristol area. Kevin was a graduate of John S. Battle High School and King College with a double... View Obituary & Service Information

The family of Kevin Wayne Blaylock created this Life Tributes page to make it easy to share your memories.

Send flowers to the Blaylock family.