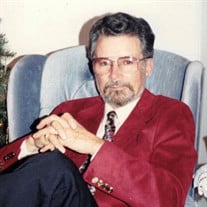 Retired Master Sergeant, Lavene “Lee” Jones Sr., age 90, of Bristol, VA, passed away on Thursday, September 17, 2020 at Bristol Regional Medical Center. He was born May 2, 1930 in Letcher Co., Kentucky. He was the son of the late Riley and Cora Jones and was a member of the Living Church of God. Lee left home at an early age and went to work for Ritter Lumber Co. and in the coal mining industry. In 1951, he enlisted in the U.S. Air Force, serving during the Korean and Vietnam Wars. He was stationed at several bases, both in the United States and abroad, working as a jet engine mechanic / instructor and retired as a Master Sergeant in 1971. After his military retirement, he worked in sales and service for Bob Callahan Dodge in Bristol, Campbell Ford in Bristol, Anderson Ford in Kingsport and part-time at Jay Johnson Toyota, doing dealer trades. Along with his parents, he was preceded in death by his sister, Lola Vae Peters of Kingsport. Survivors include his loving wife, Dolores Imogene Jones; two sons, Garry Blevins and wife Martha and Lavene “Bob” Jones, Jr. and wife Patty; five grandchildren, four great-grandchildren including his checker playing buddy, Oakley, and several very special cousins including Bruce Jones, who was like a brother to Lee. A Military funeral service will be conducted at 1:00 P.M., Friday, October 2, 2020 at Mountain Home National Cemetery with Military Rites conducted by the Shaw Air Force Honor Guard. The family would like to extend a special thanks to the staff at Oakmont at Gordon Park. In lieu of flowers, memorials should be made to the Disabled Veterans Foundation, 4601 Forbes Blvd., Suite #130, Lanham, MD 20706. Condolences and memories may be left for the family at akardfunerlahome.com Akard Funeral Home, (423) 989-4800 is serving the Jones family.

The family of Lavene "Lee" Jones Sr. created this Life Tributes page to make it easy to share your memories.

Send flowers to the Jones family.