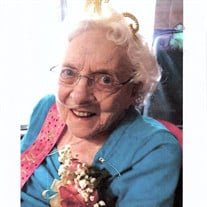 Lucille S. Sorah, age 96, passed away Wednesday, January 3, 2018 at Cambridge House, Bristol, Tennessee. She was a beloved wife, mother and grandmother and was a very active member of Edgemont Presbyterian Church. Lucille retired from the Washington County Virginia School System after 47 years of service and was a member of the Retired Teachers Association, and a member of the Eastern Star. She was a former volunteer at Healing Hands and was still delivering Meals on Wheels at age 86. Along with her parents, William Preston and Winters Marshall Sarver, she was preceded in death by her husband, George W. “Chick” Sorah; sister, Margaret Lawson and brother, William “Buddy” Sarver. She is survived by her son, William L. “Bill” Sorah and wife, Karen; grandchildren, Andrew Brett Sorah of Charlotte, NC, Emily Lyn Sorah of Raleigh, NC and Jennifer S. Trotter and husband, Matt of Bristol, TN. The family would like to extend a special thank you to the staff of Cambridge House for the loving care they gave to Lucille. The funeral service will be conducted at 8:00 pm, Saturday, January 6, 2018 at Edgemont Presbyterian Church with Rev. Larry Stallard and Rev. Aaron Bartmess officiating. The interment and committal will be at 2:00 pm, Sunday, January 7, 2018 at Glenwood Cemetery. Pallbearers will be Matt Trotter, Preston Campbell, John Ed Salyer, Dan Witcher, Charles Henninger and David Lawson. Honorary Pallbearers will be retired Deacons and Elders of Edgemont Presbyterian Church. The family will receive friends from 6:00 – 8:00 pm prior to the service. In lieu of flowers the family suggest donations be made to : Mission Fund of Edgemont Presbyterian Church, 1013 Edgemont Avenue, Bristol, TN 37620 or Healing Hands of Bristol, TN, 245 Midway Medical Park, Bristol, TN 37620 Condolences may be sent to the family at akardfuneralhome.com Akard Funeral Home, 1912 West State St., Bristol, TN (423) 989-4800 is serving the family of Mrs. Sorah.

Lucille S. Sorah, age 96, passed away Wednesday, January 3, 2018 at Cambridge House, Bristol, Tennessee. She was a beloved wife, mother and grandmother and was a very active member of Edgemont Presbyterian Church. Lucille retired from the Washington... View Obituary & Service Information

The family of Lucille S. Sorah created this Life Tributes page to make it easy to share your memories.

Send flowers to the Sorah family.