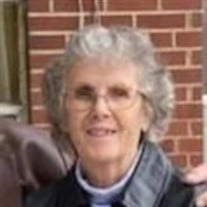 Marie Barker Statzer went home to be with her Lord on Wednesday, March 2, 2022. Marie was preceded in death by her parents, Gordon and Virginia Barker and sister, Betty Jo Baker Marie was born September 25, 1939 and raised on a farm in Mendota, VA. After graduating from Hamilton High School, she married and moved to Chicago, IL and worked as a teletype operator. She later moved to Westfield, IN where she ran the office and worked the sales floor of the family appliance business. When she and her husband, Jerry returned to her beloved Mendota, she worked shoulder to shoulder with him as they built their farm. In later stage of life, she resides in Bristol, VA and assisted her husband in their rental property business. Marie was a devout Christian and was a member of several Baptist churches in the communities where she lived. She was a member of Charity Baptist Church in Blountville, TN when she received her heavenly calling after a lengthy illness. She is survived by her loving husband of sixty-five years, Gerald Statzer, Sr.; four children, sons, Wayne and wife, Patricia; Darrell and wife, Amy; daughters, Patti and husband, Jake Haught and Wanda and husband, Gary Hensley. Marie has twelve grandchildren that she adored; grandsons, Gerald, III, Matthew, Jacob, Joshua, Gary, Jr., John, Steven and James; granddaughters, Sarah, Amanda, Jessica and Jenny. She was blessed with several great-grandchildren; two brothers, Gordon, Jr. and Gary and several nieces and nephews. The funeral service will be conducted at 11:00 A.M., Saturday, March 5, 2022 in Akard Funeral Home Chapel with Rev. Dillon White officiating. Burial will follow at Mountain View Cemetery. Pallbearers will be Dub Statzer, Matthew Statzer, Junior Hensley, Steven Hensley, John Haught, James Haught, Sherman Pippin, and Kaleb Streit. The family will receive friends from 6:00 – 8:00 P.M., Friday at the funeral home. Condolences and memories may be shared with the family at akardfuneralhome.com Akard Funeral Home, (423) 989-4800 is honored to be serving the Statzer family.

Marie Barker Statzer went home to be with her Lord on Wednesday, March 2, 2022. Marie was preceded in death by her parents, Gordon and Virginia Barker and sister, Betty Jo Baker Marie was born September 25, 1939 and raised on a farm in Mendota,... View Obituary & Service Information

The family of Marie Barker Statzer created this Life Tributes page to make it easy to share your memories.

Marie Barker Statzer went home to be with her Lord on Wednesday,...

Send flowers to the Statzer family.