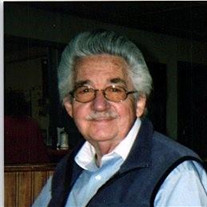 Marvin Edward “Tim” Cooper, age 88, of Bristol, VA passed away Wednesday, January 9, 2019 at Bristol Regional Medical Center. He was a veteran of the United States Army having served overseas. He was a supervisor for Sperry and was a cake decorator for Peter Pan Bakery. For the past 25 years before his illness he worked for Heritage Antiques. Along with his parents, Grover Oliver and Arlie Virginia Whicker Cooper he was preceded in death by his wife, Barbara Jane Cooper and grandson, Kristopher Cooper; sister, Bernice Harrison and brothers, Gene Cooper and Ralph Cooper. Tim was a member of Bethel View Baptist Church. He is survived by his daughter, Penny Rush of Bristol, VA; son, Gary Cooper of Bristol, VA; grandchildren, Amanda Stewart and husband Preston, Megan Balthis and Mahesh Krishnan, Nicole Harmon and Nick Ingle; great-grandchildren, Ashlyn Stewart, Riley Stewart, Kingston Stewart, Nova Ingle; sister, Betty Lane of Bristol, VA; sister-in-law, Mary Cooper; first cousin, Nancy Cross and several others; and several nieces and nephews. The funeral service will be conducted at 7:00 pm, Friday, January 11, 2019 in Akard Funeral Home Chapel with Pastor Preston Stewart officiating. The committal and interment will be at 11:00 am, Saturday, January 12, 2019 in Mountain View Cemetery with Military Rites conducted by the DAV # 40 and The Virginia National Guard. The family will receive friends 6:00 – 7:00 pm prior to the service. The family would like to extend a special thank you to Advanced Home Care and his caregivers, Kathy, Vickie and Kelly who showed him very special care and to Doctor Jean Mancini and her staff. Also special thanks to his singing buddy, Penny Poore, RN. In lieu of flowers memorials may be made to The American Stroke Association, 4708 Papermill Drive N.W., Knoxville, TN 37909 Condolences may be sent to the family at akardfuneralhome.com Akard Funeral Home, 1912 West State St., Bristol, TN (423) 989-4800 is serving the family of Mr. Cooper.

Marvin Edward &#8220;Tim&#8221; Cooper, age 88, of Bristol, VA passed away Wednesday, January 9, 2019 at Bristol Regional Medical Center. He was a veteran of the United States Army having served overseas. He was a supervisor for Sperry and was... View Obituary & Service Information

The family of Marvin Edward "Tim" Cooper created this Life Tributes page to make it easy to share your memories.

Send flowers to the Cooper family.