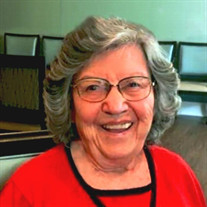 Ora Parker Singletary, age 94, passed peacefully away on Thursday, December 24, 2020 at Oakmont at Gordon Park, Bristol, VA, formerly of Charleston, SC. Ora moved to Bristol three years ago to be closer to her family. She was the daughter of the late Ollie Brownlee Parker and Stephen Benjamin Parker. She was also preceded in death by her husband, Earl Hasell Singletary and her son, Earl Singletary, Jr. Born the second of eight children on a farm in Cross, SC, Ora Parker Singletary carried both the love of family and planting things in the soil she cultivated there throughout her life. After she moved to Charleston and married a near-perfect man, Earl Hasell Singletary, they lived briefly in Florida during his service at Naval Air Station Banana River, Cocoa Beach, FL before returning to Charleston in 1945. She gave birth to her son, Earl Singletary, Jr. in 1946 and it was the sadness of her life to lose him in a car accident in 1963. She gave birth to her daughter, Nancy Singletary Hoffer in 1950 and it was the joy of her life to see her daughter become the stellar mother of her three grandchildren, Phillip, Laura and Merritt. She was a great fan of what her husband called her “green retreats” and spent her days off work cultivating her garden, which earned her more than a few “Yard of the Month” awards over the years in Fort Johnson Estates. With equal skill, Ora could grow tomatoes in the sandy soil of James Island; suss out the best roadside stand to buy butter beans; teach her grandkids how to kill the ground moles that dared muck with her garden; wow the women at church group with her potato salad and whip up a heaven-sent buttermilk biscuit. She worked tirelessly her entire life, first at American Tobacco Company and then at Condon’s Department Store. When her daughter’s family visited from Tennessee, they’d more often than not have to stop by Condon’s on they way into town to find her at work in the men’s department, busy recommending the perfect suit and tie combinations to her loyal customers. She loved her work and was even known to bust a shoplifter or two, not to mention the fact that Condon’s had to close its doors permanently to get her to finally take up retirement in 2000. What luck she had then to enjoy those free years with her husband, Earl. Perhaps as close to a perfectly-matched pair as one might find, Ora and Earl never ran out of conversations and shared most evenings with their feet up in recliners in the den, chatting over the day’s newspaper or watching country music performances on TV. Though she never quite got over the heartbreak of her husband’s death in 2012, she kept carrying the torch of the Singletary line and was delighted by the birth of her great-grandchild, Shreve Earl Brouwers in 2013. Hers was a life lived true. She took no guff from those who crossed her; she spared no treat for those she loved. This will perhaps be best remembered by her grandchildren, who spent countless holidays and summer evenings perched on the wooden stools at her kitchen counter, drinking Coburg milk and basking in the glow of her cooking for them, no meal will ever again taste so sweet. Survivors include her daughter, Nancy Singletary Hoffer (Phil) of Bristol, TN; grandchildren, Phillip Hoffer of Johnson City, TN; Laura Hoffer (Marcel Brouwers) of Knoxville, TN and Merritt Hoffer of Johnson City, TN; great-grandson, Shreve Brouwers; brother, Roy Parker (Mamie) of Moncks Corner, SC; sister, Edith Metts (Marion) of Cross, SC and numerous nieces and nephews. The family would like to thank the staff of Oakmont at Gordon Park for the compassion and care they gave Ora. A special thank you to the nurses who patiently listened to her stories of Charleston and love of the lowcountry she never forgot. Also, a special thank you to her nurse, Paula, who knew the way to Ora’s heart was a hot cup of coffee that she always had ready for her. Due to Covid-19 restrictions, services will be private. A memorial service will be held in Charleston at a later date. Those wishing, may send memorials to Second Presbyterian Church, 342 Meeting St., Charleston, SC 29403. Condolences and memories may be left for the family at akardfuneralhome.com Akard Funeral Home, (423) 989-4800 is serving the Singletary family.

Ora Parker Singletary, age 94, passed peacefully away on Thursday, December 24, 2020 at Oakmont at Gordon Park, Bristol, VA, formerly of Charleston, SC. Ora moved to Bristol three years ago to be closer to her family. She was the daughter... View Obituary & Service Information

The family of Ora Parker Singletary created this Life Tributes page to make it easy to share your memories.

Send flowers to the Singletary family.