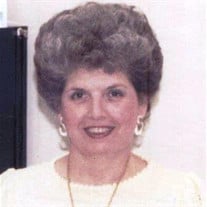 Early in the morning on July 24th, 2018, Peggy B. Barger met her savior and was reunited with her father and mother. She was born Peggy Neal Branson on December 6, 1931 to William Neal Branson and Pauline Wade Branson in Wallace, VA. Her father passed away in 1937 and, as she used to say, she and her mother (who never remarried) grew up together in Bristol, VA. After graduating from Bristol Virginia High School, she started working at Washington Bank & Trust in Bristol, VA as a bank courier. One of her responsibilities was to take checks drawn on other banks downtown to those banks for deposit to Washington Trust’s account. Every afternoon after the banks closed, one particular bank she visited was First National Bank of Bristol, across the street. She would often see a handsome young man from First National crossing the street at the same time to take the deposit for First National to Washington Trust. Eventually, that young man, Billie A. Barger, asked her for a date. After some reluctance, she agreed. They would often eat lunch at Bunting’s Drug Store near the banks, purchasing two chili dogs and sharing a Coke for a whopping twenty five cents! The relationship grew and Billie and Peggy were married on December 26, 1950, days before he reported for duty in the United States Air Force. From that date until her passing, she always signed her checks as Mrs. Billie A. Barger because, as she was proud to say, “That’s one of the reasons I married him!” On January 2, 1953, while Billie was home on short-term leave from Wheelus Air Base in Tripoli, Libya, their only child, Daniel A. Barger was born. When his enlistment was up, Billie returned to Bristol and worked for Dominion National Bank. When their son was old enough to go to kindergarten, Peggy’s mother, Polly as her friends called her, quit her job at S. E. Massengill to tend to Danny and Peggy went to work for Bristol Tennessee Electric System. In September 1958, Billie, who was then working for the Federal Home Loan Bank System as an examiner, was transferred to a sub-regional office in St. Petersburg, FL. The family, which included Pauline (who was known to everyone in the family as “Nana” and passed away in 2004), packed up and made the drive to their new hometown where they still reside. Peggy worked briefly for St. Petersburg Beach Bank & Trust but in 1959 she started a career at Florida Power Corporation (now Duke Power) which spanned 28 years. She retired in 1987 as a Supervisor of Customer Service. During that time, she became involved with Business and Professional Women’s Foundation (BPW). She was President in 1981. After retirement, she supported her husband in founding two banks in Seminole, FL. The highlight of her retirement, however, was the birth of her only grandchild, Leah Christine Barger on Mother’s Day, May 13, 1990. They spent many hours together watching and singing to Gaither Homecoming videos. She was active in her church, Lakewood United Methodist and was a member of St. Luke’s United Methodist at the time of her passing. There is a classic Southern Gospel Song entitled “What a Day That Will Be”, written and copyrighted by Jim Hill. It speaks of no more heart aches, no more tears, no more sorrow, no more burdens, no sickness or pain, no more parting and living in the presence of her Savior. The words express the joy and peace she now has. She is survived by her husband of 67 years Billie (St. Petersburg, FL), her son Daniel, daughter-in-law Kim, granddaughter Leah and her granddog Lexie (Sarasota, FL), three sisters-in-law, Iris Ellis, Lillian Fleenor and Patsy Melvin (Marvin) The committal service will be conducted at 10:30 A.M., Saturday, August 11, 2018 at Mountain View Mausoleum Chapel with Dr. Jonathan Feathers officiating. Interment will follow in Mountain View Cemetery. Peggy never wanted a “big deal” made of her passing. In lieu of flowers, she and her family ask that donations be made to: Operation Sing Again, a foundation that has taken on the task of raising funds to manufacture almost 47,000 Hymn DVDs to be distributed to Skilled-Nursing Care facilities across the United States. http://gospelmusichymnsing.com/ Gospel Music Hymn Sing Foundation Operation Sing Again P.O. Box 1182 Morristown, TN 37816 Rotary Club of Seminole Lake PO Box 3294 Seminole, FL 33775 https://seminolelakerotary.org/ Boy Scouts of America Greater Tampa Bay Council 13228 N. Central Ave, Tampa, FL 33612 https://tampabayscouting.org

Early in the morning on July 24th, 2018, Peggy B. Barger met her savior and was reunited with her father and mother. She was born Peggy Neal Branson on December 6, 1931 to William Neal Branson and Pauline Wade Branson in Wallace, VA. Her father... View Obituary & Service Information

The family of Peggy Branson Barger created this Life Tributes page to make it easy to share your memories.

Send flowers to the Barger family.