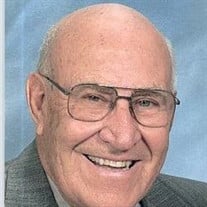 Robert “Bob” Brown, age 89, of Bluff City, TN formerly of Bristol, TN went to be with Jesus, Tuesday, January 9, 2018 at Johnson City Medical Center. He was a native of Knoxville, TN and had made his home in Bristol since 1959. He was the son of the late Joseph D. and Ruby K. Reece Brown and was also, preceded in death by a son, Tom Brown; brother, Walter D. Brown and sister-in-law, Dot Brown. Bob was a graduate of Knox Central High School and Carson-Newman College and had played football throughout his time in high school and college. He had served as a Little League football and baseball coach with the Bristol Tennessee Parks and Recreation Dept. He was a retired computer forms sales representative and was a U.S. Marine Corps veteran. Bob had been an active member of Euclid Avenue Baptist Church where he served as a Deacon, Trustee, Sunday School teacher for 40 years, member of the church choir and a member of many different committees. Survivors include his wife, Nancy S. Brown; two daughters, Vickie Teague and husband, John of Telford, TN and Elaine Hoffert and husband, Rick of Clarksville, TN; one son, J. Michael Brown and wife, Shelly of Bluff City, TN; six grandchildren; nine great-grandchildren; and four nephews. The funeral service will be conducted at 6:00 P.M., Thursday, January 11, 2018 in Euclid Avenue Baptist Church with Dr. Allen Roberts officiating. The committal service and interment will be conducted at 1:00 P.M., Friday in Glenwood Cemetery. Pallbearers will be Jonathan Teague, Jason Teague, Jeff Hoffert, Jerry Hyatt, Hoot Gibson, Alan Sharrett and Stuart Sharrett. Honorary pallbearers will be the Deacons of Euclid Avenue Baptist Church. The family will receive friends from 4:00 – 6:00 P.M., Thursday prior to the service at Euclid Avenue Baptist Church. Memorials may be sent to Euclid Avenue Baptist Church Building Fund, 900 Euclid Ave., Bristol, VA 24201 Condolences and memories may be left for the family at akardfuneralhome.com Akard Funeral Home, (423) 989-4800 is serving the Brown family.

The family of Robert "Bob" Brown created this Life Tributes page to make it easy to share your memories.

Send flowers to the Brown family.