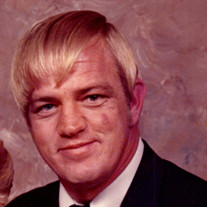 Ronald L. Davis, age 74, of Bristol, VA went to be with the Lord, on Saturday, August 24, 2019 at Bristol Regional Medical Center surrounded by his wife and two sons. He was born on January 17, 1945 in War, WV. He was a graduate of Lord Botetourt High School and Virginia Western Community College and was also a proud veteran of the U.S. Marine Corps. He spent a total of 36 years as a law enforcement professional, beginning his career as a deputy sheriff with the Botetourt County Sheriff’s Office, where he spent 11 years then moved on to help begin the Virginia Alcohol Safety Action Program (VASAP) as a Police Liaison/Public Information Officer, where he spent just over 2 years. Ronald then accepted the job as Chief of Police of Lebanon Police Dept. where he spent 3 years and he ended his professional career at the Southwest Law Enforcement Academy spending his first 8 years as Assistant Director and the last 12 years as the Director. He was a proud member of the Fraternal Order of Police. He was preceded in death by his parents, John Franklin and Delores Blevins Davis; grandson, Benjamin Joseph Davis and brothers, Jimmy, Bobby and Billy Davis. Survivors include his beloved wife of 53 years, Elaine Cooper Davis; Sons, Christopher Davis and wife, Kristi, and Paul Davis and wife, Danna; sisters, Shelby Leonard, Debbie Hayslett and Ann Duncan; brother, David Davis; grandchildren, Ian, Reid, Holly, Emma and Jaxon; furbabies, Benny, Isabelle, Chloe and Elvira and numerous nieces and nephews. He was a faithful parishioner to his church, St. Anne Catholic Church, where he was involved in several faith related and community volunteer programs, such as: Knights of Columbus (Former Grand Knight, KOC 6695), Bristol Faith in Action, Eucharistic Ministry (home and church), Meals on Wheels, Soup Kitchen, Lecturer, Usher, coordinated the annual Fishing Rodeo, assisted in St. Anne Bingo and helped build wheelchair ramps and railings for those in need. The family wishes to acknowledge with deep appreciation, the many expressions of love, concern and kindness shown to them during this hour of bereavement. May God bless and keep you! The Funeral Mass will be conducted at 1 P.M., Wednesday, August 28, 2019 at St. Anne Catholic Church with Father Chris Hess officiating. Pallbearers will be Charles Clay Robinette, Jamie Begley, Scott Jordan, Russ Malone, Ryan Davidson and Derek Call. Honorary pallbearers will be all prior graduates of Southwest Law Enforcement Academy. The committal service and interment will be conducted at 2:00 P.M., Thursday at Mountain View Cemetery in Vinton. The family will receive friends from 11:00 A.M. – 1:00 P.M., Wednesday prior to the service at the church. In Lieu of flowers, memorials may be sent to St. Jude Research Hospital, 501 St. Jude Place, Memphis, TN 38105 or a charity of your choice. Condolences and memories may be left for the family at akardfuneralhome.com Akard Funeral Home, (423) 989-4800 is serving the Davis family.

Ronald L. Davis, age 74, of Bristol, VA went to be with the Lord, on Saturday, August 24, 2019 at Bristol Regional Medical Center surrounded by his wife and two sons. He was born on January 17, 1945 in War, WV. He was a graduate of Lord Botetourt... View Obituary & Service Information

The family of Ronald Lee Davis created this Life Tributes page to make it easy to share your memories.

Send flowers to the Davis family.