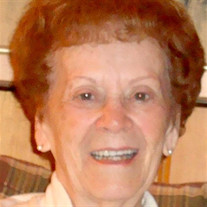 Ruth (Rudy) Miller Giles, a long-time resident of Bristol, TN, passed away Wednesday, April 8, 2020. She was born in Evarts, KY on January 8, 1922 and was the daughter of the late Albert and Amanda Jane Miller. The family lived in Evarts for only a short time before moving to Virginia. Ruth spent her early years in Appalachia and Big Stone Gap, and was a graduate of Big Stone Gap High School. She was an active high school athlete, participating in the varsity basketball and track teams. She was also a cheerleader and drum majorette with the high school band. After graduating high school, she enrolled in the Gallinger Nursing School in Washington D.C. She withdrew from the school after marrying her high school sweetheart, Herman Giles, who had taken a job in Washington to be near her. Ruth was an avid supporter of animal welfare and wildlife causes. She was a member of the Bristol Humane Society for many years and served on the Board of Directors. She also had been a member of the Board of Directors of the Bristol Ballet Company. In addition to her parents, she was preceded in death by an infant brother and by her husband, Herman Giles, former publisher of the Bristol Herald Courier. Survivors include: Kay Hover of Bristol, TN; Eric Giles of Florence, AL; Dr. Amanda McGrady of the Washington D.C. metro area; five grandchildren, Glynnis Hover, San Antonio, TX; Stacey Downing and husband Jeff of Chattanooga, TN; Clay Giles and wife Teresa of Bristol, TN; Haley Stephens and Emily Stephens, both of Knoxville, TN. She also has four great grandchildren, Savannah and Grant Giles of Bristol, TN and Taylor and Sarah Williamson of Chattanooga, TN. There will be a viewing for family members only. There will be no formal visitation. A private burial will be at Glenwood Cemetery. Condolences and memories may be left for the family at akardfuneralhome.com Akard Funeral Home is serving the family of Mrs. Giles.

Ruth (Rudy) Miller Giles, a long-time resident of Bristol, TN, passed away Wednesday, April 8, 2020. She was born in Evarts, KY on January 8, 1922 and was the daughter of the late Albert and Amanda Jane Miller. The family lived in Evarts for... View Obituary & Service Information

The family of Ruth Miller Giles created this Life Tributes page to make it easy to share your memories.

Send flowers to the Giles family.