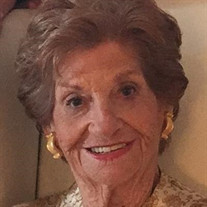 Sara Stone Burleson, age 94, passed away on Tuesday, February 11, 2020 at Oakmont at Gordon Park. Sara was born on October 6, 1925 in Durham, NC, to the late Ethel Byrd Stone and James Right Stone. Sara graduated from Durham High School and attended Catawba College where she was a cheerleader. While at Catawba, she met the love of her life, William Wesley Burleson, “Burly”. They were married in 1949 until his death in 1999. They raised their children with a strong emphasis on faith, family and friendship. Their home was a gathering spot for all! Sara was a bright light and her family and multitude of friends will cherish memories of her joyful personality and her enthusiasm for life. Her strong Christian faith and her passion for people shaped a life well lived, full of unconditional love. She delighted in making people laugh, and she never missed a chance to dress up in costume. Whether sharing her homemade pickles and rum cakes, or dancing at her grandchildren’s weddings, Sara lived life to the fullest. She often left surprise love notes after a visit with her children and grandchildren, and she was a cherished friend of their friends as well. In earlier years, she was an avid tennis player and golfer, and she continued her love of the game of mahjongg throughout her later life. She was a member of Central Presbyterian Church, where she served as both Deacon and Elder. She was a member of the 1931 History Club, the Bristol Junior League and the former Border Guild. In addition to her parents and her husband, she was preceded in death by her brother, James Right Stone, Jr. and step-great-grandson, Zachary Beachley. She is survived by her three children, Lynn Burleson Hodges and husband, Charley of Charlotte, NC; William Wesley Burleson, Jr. (Wes) and wife, Barbie of Bristol, TN; James Henry Burleson (Jim) and wife, Connie of Kingsport, TN; her grandchildren, Charles Hodges and wife, Elizabeth of Richmond, VA; William Hodges and wife, Katie of Charlotte, NC; Simpson Burleson Schmitt and husband, Allan of Charlotte, NC; Banner Burleson Vicary and husband, Michael of Burlington, NC; Wesley Burleson Leuzinger and husband, Micah of Bristol, TN; Becca Burleson of Wilmington, NC; Rachael Burleson of Durres, Albania, and Sarah Burleson of Kingsport, TN; great-grandchildren, Barnes Schmitt, Kennedy Schmitt, Collins Schmitt, Henry Hodges, Winnie Hodges, Sara Clementine Hodges and Lily Burleson Wilson; step-grandchildren, Nikki Beachley and Karissa Deal, both of Kingsport, TN; step-great-grandchildren, Isabella and Christian Beachley, Kylan and Keiralynn Deal and Aiden Ketron; and her nieces and nephews. Heartfelt thanks to the staff and caregivers at Oakmont at Gordon Park; and her special friend, Shirley Lowe, for all the TLC they bestowed on Sara. The funeral service will be conducted at 3:00 P.M., Sunday, February 16, 2020 at Central Presbyterian Church with Rev. Ann Aichinger officiating. The family will receive friends from 2:00 -3:00 P.M., Sunday prior to the service at the church. A reception will follow at the Bristol Hotel from 4:00 -6:00 P.M. In lieu of flowers, memorials may be sent to Central Presbyterian Church, 301 Euclid Ave., Bristol, VA 24201 or Healing Hands Health Center, 245 Midway Medical Park, Bristol, TN 37620. Condolences and memories may be left for the family at akardfuneralhome.com Akard Funeral Home, (423) 989-4800 is serving the Burleson family.

The family of Sara Stone Burleson created this Life Tributes page to make it easy to share your memories.

Send flowers to the Burleson family.