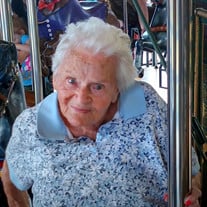 Thelma Hall Stanley, 95, of West Chester Pennsylvania died on September 12th, 2019. The daughter of John and Stella Hall, Thelma was born on October 13, 1923, and was raised in the Southwestern region of Virginia. She was preceded in death by her parents, her husband, Bruce Charles Stanley, and her siblings, Bentley Hall, Andrew Hall, Gus Hall, Gladys Hall Allison and their spouses, Madeline Hall, Lou Hall, Howard Allison and her son-in-law, Robert Snyder. She is survived by her daughter, Janet Snyder, and lifelong friend, Yong Blaine Rapaport and her daughter Kay Blaine-Dale., as well as several nieces and nephews. After retiring from the Department of Army in Alexandria Virginia, Thelma and Bruce moved to Bristol, Virginia to be close to friends and family. A few years after the loss of her husband, Thelma chose to move to West Chester, Pennsylvania to be with her daughter Janet and husband Robert Snyder. Ever the adventurer, Thelma enjoyed travel to Aruba, Hawaii, Europe, and most of the Caribbean. She loved road trips, cruises, and flying. She was always ready for a new adventure. Her sense of humor and compassion made her a welcome companion for family and friends. On two separate occasions she participated in road trips across the USA. Thelma was a loving daughter, wife, mother, aunt, and friend. She loved life and lived every day to the fullest. Perhaps the only thing she loved more than travel was her weekly forays to Gramm’s Kitchen where she could indulge herself with extra crisp bacon, cream chip beef and butter pecan ice cream while being spoiled by their sweet staff. She will be sorely missed by her daughter, her nieces and nephews, friends and family members. Spread your wings, your next adventure has just begun. The funeral service will be conducted at 2:00 P.M., Sunday, September 15, 2019 in Akard Funeral Home Chapel with Pastor Randall Morton officiating. The committal and interment will be at 11:00 A.M., Monday, September 15, 2019 in Temple Hills Memorial Gardens, Castlewood, VA. Condolences may be sent to the family at akardfuneralhome.com Akard Funeral Home, 1912 West State St., Bristol, TN (423) 989-4800 is serving the family of Mrs. Stanley.

Thelma Hall Stanley, 95, of West Chester Pennsylvania died on September 12th, 2019. The daughter of John and Stella Hall, Thelma was born on October 13, 1923, and was raised in the Southwestern region of Virginia. She was preceded in death by... View Obituary & Service Information

The family of Thelma Hall Stanley created this Life Tributes page to make it easy to share your memories.

Send flowers to the Stanley family.