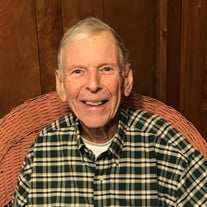 William (Bill) Roddy Buchanan, age 87, of Bristol, Virginia, transitioned from this life to his heavenly home on Friday, April 29, 2022 at Bristol Regional Medical Center. He was born on January 16, 1935 to the late Reverend Richard O. and Virginia White Buchanan at Kings Mountain Hospital. Bill grew up as a missionary kid “MK” when his parents served as Baptist home missionaries in Boyou Plaquemine, Sorrel and Pigeon, Louisiana, and Oahu, Territory of Hawaii. He went to different schools each year as they transitioned to different regions. In high school he was home schooled. In Bristol, he attended Mary Street and Robert E. Lee Schools, and the family went to the field as missionaries of Euclid Avenue Baptist Church. In 1954 he moved back to Bristol and soon married the love of his life, Peggy Simmons, who was married on May 27, 1955, and have been married for 66, nearly 67 years. Other than a few short years Bristol has been their home. His grandson, Andrew, called him “Boo boo” a name he will forever be remembered by all the family. He was preceded in death by his parents, a brother, Preston Paul Buchanan, his sister-in-law, Patricia Yap Buchanan, and a wonderful family of grandparents, aunts and uncles that he loved very much. Bill was employed at Raytheon until he started Buchanan Machine Company in 1972 which he operated until he retired in 1999. He was a skilled machinist and could build or repair anything, it seemed. He was a licensed pilot and patented several prototype Gyro-copters that were flown out of the Virginia Highlands Airport. His retirement project was constructing a 26’ custom-made diesel boat and trailer that could sleep four. Many will remember this “tugboat” that he kept at Davis Boat Dock on Boone Lake for many years. He accepted Christ as his Savior as a child and was baptized in May 1944 in Bayou Sorrel in Louisiana. He lived his life serving Christ and others. He was a very quiet man but could be seen behind the scenes driving the Children’s Good News Chapel on Wheels in the Christmas parades, or he and Peggy delivering devotionals to the retirement communities for 50 years. He has attended Virginia Avenue Baptist Church for over 30 years. He is survived by his wife, Peggy; three sons, William R, Buchanan, Jr., Tim Buchanan (Susan), and Ben Buchanan; two grandchildren, Andrew Buchanan (Skylar), and Allison Buchanan, whom he loved very much; his big brother, Richard Oliver Buchanan Jr., of Honolulu, Hawaii; niece, Patricia “Patty” (Darrel) Takebayaski; as well as Peggy’s niece Teresa Strock, Sharon Dixon, and other nephews and extended family. The graveside will be conducted at 2:00 P.M., Sunday, May 1, 2022 at Mountain View Cemetery with Reverend Mike Tyson officiating. Honorary pallbearers will be Andrew Buchanan (his grandson), John Dixon, Orion Fleenor, Allen King, Benny Wright, Jerry Strock, Charlie Harris, and Dr. Thomas Green, Jr. The family would like to thank the BRMC ER Department and the staff on 3-East & 2-West for their excellent care, as well as his primary care doctor and staff at Dr’s Green, PC. In lieu of flowers, memorials may be sent to Virginia Avenue Baptist Church, 1401 Virginia Avenue, Bristol, TN 37620, or to the Christian charity of your choice. Also, it would be a great remembrance by “paying it forward” or taking care of someone in need. Condolences and memories may be shared with the family at akardfuneralhome.com Akard Funeral Home, (423) 989-4800 is honored to be serving the Buchanan family

William (Bill) Roddy Buchanan, age 87, of Bristol, Virginia, transitioned from this life to his heavenly home on Friday, April 29, 2022 at Bristol Regional Medical Center. He was born on January 16, 1935 to the late Reverend Richard O. and Virginia... View Obituary & Service Information

The family of William (Bill) Roddy Buchanan created this Life Tributes page to make it easy to share your memories.

Send flowers to the Buchanan family.