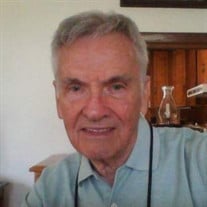 William “Bill” Earl Collier, age 84, died peacefully, surrounded by family on Sunday, January 19, 2020 after a short, dignified battle with cancer. He was born October 19, 1935 in Roseboro, NC to the late Zachariah and Mable Collier. William served in the United States Air Force and was stationed in San Antonio, Texas for the duration of his enlistment. He attended business school in Charlotte, NC and began a career as a Style and Design Consultant. After several years of traveling for the company he chose a permanent assignment in Bristol, TN and soon became the owner of C’est Bon Hair Salon. A lifelong lover of the arts and culture, William supported local theater, travelled the world and collected various types of art and antiques. He was a member of Emmanuel Episcopal Church. He is survived by his brother, Luther Talmadge Collier and wife, Venessa; nephew, Vincent Collier and wife, Jocelyn, Eric Collier and wife, Jennifer all of New Jersey. Following William’s wishes he chose not to have a public memorial service or visiting hours. He will be intered in the Columbarium at Emmanuel Episcopal Church. In lieu of flowers, memorials may be made to Emmanuel Episcopal Church, P.O. Box, 1376, Bristol, VA 24201 or to The American Cancer Society, 508 Princeton Road, Suite 102, Johnson City, TN 37601 Condolences may be sent to the family at akardfuneralhome.com Akard Funeral Home, 1912 West State St., Bristol, TN (423) 989-4800 is serving the family of Mr. Collier.

The family of William Earl Collier created this Life Tributes page to make it easy to share your memories.

Send flowers to the Collier family.