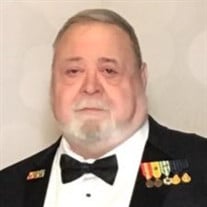 William A. "Bill" Dennison, Jr. transitioned to eternal life on November 6, 2021. He was the son of W. A. Dennison and Kent Crockett Dennison. He is survived by his wife of 47 years, Jacqueline (Jackie) Weaver Dennison, brother Robert Kent Dennison of Roanoke, and numerous very close cousins that he loved dearly. Bill was a graduate of Bristol Virginia High School, class of '64. He attended Va. Tech for one year prior to joining the US Navy as a second-generation Seabee in 1966. Bill served six years in the Navy doing two tours in Viet Nam as an EA2, serving with MCB7. He was combat wounded Christmas Eve, 1966. After being discharged from the USN Bill again attended VA Tech for two years. After leaving VA Tech he worked for VDOT as a Road Inspector, working on the Front Street project during Urban Renewal. He left VDOT to begin his long 35-year tenure with the City of Bristol, Virginia. He started out as Building Official and went on to hold the positions of City Engineer and Director of Public Works. He also served as the Legislative Liaison for the City of Bristol, VA in Richmond. He served as Assistant City Manager for 20 years and City Manager for three years before retiring 1 January 2010. Bill was an avid fly fisherman and hunter. He and Jackie participated in both walking and riding bird dog field trials for many years. He was a son of Virginia and a son of the South. He loved the Commonwealth with its mountains and valleys. He was also very proud of his Irish heritage. One of his favorite quotes was "May you be in heaven a half hour before the devil knows your dead". Bill was a life member of the DAV Bristol #40, the Vietnam Veterans of America, and a Life Member of the Navy Seabee Veterans of America. Bill was a Life Member of the Virginia Division Sons of Confederate Veterans and served as 6th Brigade Commander for 6 years, and was also a Life Member of the Military Order of Stars and Bars. Bill was also a member of the Bristol Historical Association and the Historical Society of Washington County Virginia. Bill was the second youngest Scout in Virginia to earn his Eagle Scout badge. Many thanks to Dr. Patel, Sr. Sah, Dr. Foley, Dr. Saha, and Dr. Fernandes for their care during his three-week hospitalization. Also, Caris Home Health, especially Ashley Raines. A celebration of life service will be conducted at 2:00 P.M., Thursday, November 18, 2021 at Cumberland Park, Bristol, VA with Rev. Edwin Lacy officiating. In lieu of flowers, memorials may be sent to Wounded Warrior Project, P.O. Box 758516, Topeka, KS; Bristol Historical Association, P.O. Box 204, Bristol, TN 37621; or the Historical Society of Washington Co, VA, P.O. 484, Abingdon, VA 24212. Condolences and memories may be left for the family at akardfuneralhome.com Akard Funeral Home, (423) 989-4800 is honored to serve the Dennison family

William A. "Bill" Dennison, Jr. transitioned to eternal life on November 6, 2021. He was the son of W. A. Dennison and Kent Crockett Dennison. He is survived by his wife of 47 years, Jacqueline (Jackie) Weaver Dennison, brother Robert Kent... View Obituary & Service Information

The family of William A. "Bill" Dennison Jr. created this Life Tributes page to make it easy to share your memories.

Send flowers to the Dennison family.