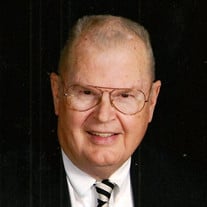 On September 16, 2018, William Thomas Parsons passed away peacefully at home after a brief battle with cancer. Tom loved his family, church, country, colleagues, and clients, whom he proudly served from 1963 until his recent illness. Tom was a proud veteran of the United States Air Force and had a passion for aviation and military history. He always said that he felt closest to God when he was in the air. Tom was born on March 7, 1936 in Wadesboro, NC. He grew up in Belmont, NC and attended Belmont Public Schools. It was there that he began his lifelong devotion to aviation after observing training flights during the second World War. He graduated from the University of North Carolina at Chapel Hill in 1958 with a degree in Business Administration and a major in Marketing. He joined the R.O.T.C at the University of North Carolina and served his active duty at Lackland Air Force Base in San Antonio, TX. He was attached to the NC National Guard in Charlotte where he was a Staff Sergeant. After college, Tom began a retail career as a buyer for J.B. Ivey & Co. in Charlotte, NC. Tom often said that the best part of this job was meeting Archer, his wife of 54 years. In 1963, he joined Connecticut General Life Insurance Company in Charlotte, NC. In 1965, he became Branch Manager of the Connecticut General Office in Raleigh, NC where he worked until 1981, when he became President of Robert C. Boswell, Inc. in Bristol, VA. After Robert C. Boswell, Inc. was sold, he owned and operated Insurance and Financial Services where he endeared himself to his many clients. During his insurance career, he was chosen to serve on the National Independent Agent’s Benefits Committee, earned the Chartered Life Underwriter (CLU) designation, was President of the Tri-Cities Estate Planning Council, President of the Chartered Life Underwriters of the Tri-Cities, and a member of the Virginia Financial Services Board of the Independent Agents of VA. He was chosen as the Agent of the Year by the Independent Agents of Virginia for the year 2000 – 2001. He served as Deacon and Elder at Central Presbyterian Church and was an active member of the Session. He also chaired the Endowment Committee. During his illness, Tom said that he could now fully appreciate the ministry of his church as he was showered with cards, flowers, meals, and visits from his beloved church family. Tom was preceded in death by his parents, Thelma and Thomas Washington Parsons. He is survived by his loving wife, Archer; their sons, William Thomas Parsons, Jr. and wife, Shelley of Abingdon, VA and Stephen Conner Parsons and wife, Vikki of Johnson City, TN; his granddaughters, Anna Elizabeth Parsons and Katherine Renee Parsons of Abingdon, VA and by his younger brother, brother, Robert M. Parson of Carrollton, GA and his children as well as numerous cousins. The family wishes to thank all of the wonderful caregivers for Mr. Parsons: Karen Bowman, Amanda Payne, Nancy Charles, Dana Statzer, Kelly Rupe, Roxanne Mullan, Lisa Belcher and Lee Lambert. A memorial celebration will be conducted at 3:00 P.M., Friday, September 21, 2018 with Pastors Frank and Ann Aichinger officiating. A reception for the family and friends will take place in the Central Hall following the memorial celebration. A private inurnment will be held in the Columbarium adjoining the sanctuary with Military Rites conducted by the D.A.V Chapter 40 and the U.S. Air Force Honor Guards. The family would like to thank everyone who ministered to them during the time of Tom’s illness. In lieu of flowers, the family requests that donations be made to Central Presbyterian Church, 301 Euclid Ave., Bristol, VA 24201; Healing Hands Health Center, 245 Midway Medical Park, Bristol, TN 37620 or the Wounded Warrior Project, P.O. Box 758516, Topeka, KS 66675-8516 Condolences and memories may be left for the family at akardfuneralhome.com Akard Funeral Home, (423) 989-4800 is serving the Parsons family.

On September 16, 2018, William Thomas Parsons passed away peacefully at home after a brief battle with cancer. Tom loved his family, church, country, colleagues, and clients, whom he proudly served from 1963 until his recent illness. Tom... View Obituary & Service Information

The family of William Thomas "Tom" Parsons created this Life Tributes page to make it easy to share your memories.

Send flowers to the Parsons family.